Tagbo: Legendary Father Of A Thousand And One Sons 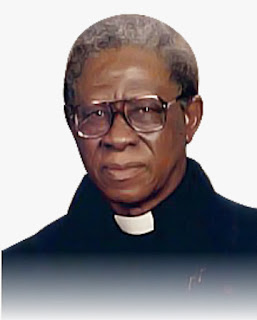 
The rule is that a Catholic Reverend Father must not father children. Another rule says that if you don’t break the rules you cannot change the world and attain the height of legends. Very Reverend Father Nicholas Chukwuemeka Tagbo has an uncountable number of very eminent sons. I count him as my father too.

He was the longest-serving Principal of the famous Christ the King College (CKC) Onitsha, and all his former students adore him as their father.

I did not attend CKC but I knew Father Tagbo more than the students because I lived all my early years in the staff quarters of the renowned secondary school with my linguist uncle, Job Okwuoma Aginam, who taught Bible Knowledge and French in the school.

After my primary school education at Sacred Heart School, Odoakpu, Onitsha, which shared the same compound with CKC, I passed the Common Entrance Examination and was given admission without my choice in St Peter’s Secondary School, Achina.

It would have been easy meat to change from SPSS Achina to CKC but Father Tagbo and my uncle decided that I could excel anywhere!

Incidentally, most of my mates who got admitted to CKC and finished up in 1977 as me could not get results due to the widespread WAEC leakages of that year known as EXPO 77.

As you can see, Father Tagbo and my uncle could see the future! The only subject I took in WASC that was not released was History, but I was home and dry in fine fettle.

Father Tagbo had such a towering impressive height to behold in his white soutane. I remember after the Biafra War that I was carrying my little sister, Chinwe, of about three years while Father Tagbo was talking in front of the CKC staff quarters and the little tot kept stretching her hand to touch the priest while I kept drawing her hand back.
Then the little baby raised her voice in protest in Igbo thusly: “Kam metunu m ya aka”, that is, “Let me touch him with my hand!”

Then, Father Tagbo took notice and admonished me to let my sister touch him before he then lifted her into his arms!

We used to be altar boys at Christ the King Parish within the CKC compound, a church that was dedicated by the then Archbishop of Onitsha (now Cardinal) Francis Arinze, with me winning a gold medal as a torch-bearer. Father Tagbo never used to say the masses, but one certain morning the regular priests – Father (later Bishop) Simon Okafor and Father (later quit the priesthood) Emeka Okide – were not around.

Father Tagbo had to step in to do the morning mass. Some altar boys had dressed up, but Father Tagbo looked at them and then turned to me and said: “Nwa Aginam (that’s what he calls me, after my maternal uncle’s surname) dress up and follow me! I don’t want anybody to delay me on the altar!”
Before I could get into gear, he was already at the altar. The mass that used to last about an hour-and-half took only 30 fast minutes! Father Tagbo was that sharp!

My attachment with Father Tagbo continued even after I had gained admission into the university. A dear friend of mine, Aloy Umeodinka, who had taken his WASC at CKC had to seek me out while I was holidaying at the CKC staff quarters to get his results and testimonial from the priest.

A book on the life and times of Father Tagbo entitled ‘Sons of a Priest’ has just been edited and published by a distinguished alumnus of CKC, the prize-winning novelist Odili Tony Ujubuonu.

A peep into the book reveals the testimony of Father Tagbo’s classmate and football playing partner, the former CEO of Ajaokuta Steel, Dr Fidelis Ezemenari who among other things disclosed that as a youth Tagbo reproached their goalkeeper – now an acclaimed Igwe of a big town – who conceded a goal and claimed he had seen six different balls at the same time, that he ought to have caught one of the balls instead of taking time to count them!

To conclude, here is an excerpt from the coffee table book:

“He gave up his life ambitions to make us rule our worlds. Tagbo was satisfied to be just a principal and a priest while some of his classmates in Christ the King College became bishops and one would later become a cardinal. He gave Nigeria over twenty Senior Advocates of Nigeria and remained an obedient citizen. He raised men who became GCON, CON, CFR, MFR etc. but was content and very proud to be honoured with just an OON. He produced three state governors while he remained a simple priest in a local parish. He had over a hundred billionaire businessmen as his sons yet he remained faithful to his vow of poverty as a priest. He trained boys that became Chief Judges of about four states and senior judges in courts across Nigeria, yet he ended as Citizen Nicholas. His bell of humility tolled twelve when he happily lived as a poor old priest under the current Archbishop of Onitsha Diocese, who was once his obedient student in Christ the King College.”
Igbo Nicholas Chukwuemeka Tagbo PM News Uzor Maxim Uzoatu