The Influence Of The Umu Ada Sect In Igboland 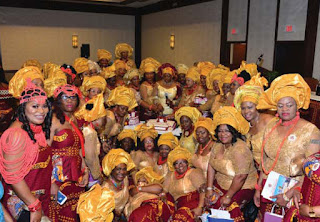 
Most communities in Nigeria are deeply patriarchal, and the Igbos, one of the largest ethnicities in West Africa, are no exception. In many parts of Igbo land, it is a common belief that men are superior to their female counterparts, and this view is enforced in many aspects. Making of laws, inheriting property are responsibilities seen to be exclusive to men, while women are groomed to be better daughters, sisters and wives’ right from infancy.

However, Igbo land makes room for Umuada, an association of indigenous women who are influential and powerful and have been for hundreds of years.

Umuada is a compound term derived from the two Igbo words umu which loosely translates to people and ada which means the first daughter. This group goes beyond the first daughters and encompasses all the daughters whose ancestry are traced to a village or town.

It is open to them whether married or unmarried, young or old, widows, divorced or separated. They are highly respected at local gatherings and are accorded such in private and public gatherings.

At this point, it is okay to describe the Umuada as a socio-political group that acts as a functional forum for women. Depending on the community, their roles can either be grouped into two: secular or spiritual.

The secular roles are almost general and cut across many communities in Igbo land. They include the settlement of disputes among fellow women and the community, infidelity issues involving offending wives, conflicts involving physical fighting between parties, assault or physical attack of a wife on her mother-in-law, and other issues under these categories which may fall under their jurisdiction.

In communities like Isuokoma in Ebonyi state, it has been recorded that the Umuada had contributed in settling disputes between fighting communities, management of domestic crises and other forms of conflict in different Isu communities especially when women in their community were involved.

Aside from this, the Umuada may also be involved in spiritual duties, depending on the community. In Osomala in Anambra state, the Umuada owe their allegiance to the visionary deity of Ohai.

Ohai is the deity to which all women in Osomala, including indigenous women and wives, married from outside the community, do obeisance. The devotees meet on designated days to dance and chant in worship to the deity. Through this deity, some members of the Umuada are endowed with foresight and can prevent impending danger in the community.

Thus, through their constant dance worship at the shrine of Ohai, the psychically gifted ones are given a revelation of things to come. The Umuada is also responsible for bathing the body of deceased female relatives and preparing it for burial. Apart from this, they are involved in the celebration of the ritual passage of the deceased into the ancestral stream and spiritual cleansing of the community during feasts and festivals.

In some cases, the Umuada has also served as checks on the abuse of power by the Council of Elders. Being a sect that represents the interest of women, it has served as a bridge between the women and the men.

The women group, in this case, include the ndi inyom- the wives of their brothers. When the wives are not pleased with certain things and when they are displeased with the state of affairs in their fatherland, they interfere in this capacity.

It can be argued that the Umuada has been instrumental to women empowerment in Igbo land and Nigeria generally and thus, important for the feminist movement. The Umuada respects tradition and works under the structures of modernity but remains insistent that men are the heads of the family, leaving them unaffected by modern developments in a way.

Nonetheless, it has led to some sort of balance in the community for the women. The forum is the vanguard in the struggle for equal opportunities for women and children in society.