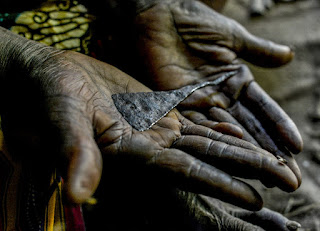 Odmangal C. has performed more than 1,000 FGM procedures on children in Chad. She has never cleaned the blade. She believes doing so would destroy its magic. Image: Sebastian Rich/UNICEF


Twenty-four communities in Oguta Local Government Area of Imo on Friday openly denounced the practice of Genital Mutilation (FGM) with a promise not to revert to it again.

The community members, with their traditional rulers, made the declaration in Oguta Local Government headquarters in the presence of the representatives of UNICEF, the National Orientation Agency (NOA). the Human Rights Commission and the Ministry of Gender and Vulnerable Groups.

In the declaration, read on behalf of the communities, by Eze Frankline Okafor, the Ottachereoha 11 of Ossemotor and Chairman of Oguta Council of Traditional Rulers, they said that FGM had ceased to be a culture and tradition of the people of the 24 autonomous communities in Oguta Local Government area.

The communities also pledged to leave their girls and women intact as their beauty was preserved when they remained the way that God created them.

“We the Royal Fathers of the 24 autonomous-communities in Oguta Local Government Area, Imo State, Nigeria, and the entire people of Oguta with over 307 villages haven been sensitised about the harmful effect of FGM and haven deliberated during community dialogue and consensus-building meetings;

“Have recognised the immediate and long-term negative health and psychosocial consequences of FGM on the health of our daughters, wives, sisters, nieces and other women who are subjected to this very harmful traditional practice.

“We also acknowledge that FGM is a denial of girls’ and women’s ability to fully exercise their human rights and be free from discrimination, violence, and inequality.”

The UNICEF Enugu Field Office Representative, Mr. Victor Atuchukwu, a Child Protection Specialists, congratulated the Oguta people on behalf of UNICEF, adding that the Southeast had shown a lot of commitment to the fight against FGM.

He expressed gratitude that the declaration came from the traditional rulers, saying that there was the need to consolidate the declaration by initiating a surveillance team that would monitor activities of people, especially pregnant women in the communities.

The State Coordinator, National Orientation Agency (NOA), Mr. Vitus Ekeocha, went into memory lane in the journey to abolish and abandon FGM in the community.

He said the public declaration was a moment of broad social recognition which showed that most people in the community supported FGM abandonment and most likely would abandon the practice.

Ekeocha said the declaration was a significant decisive step in the campaign to end FGM.

“For communities to willingly decide to abolish any tradition or culture, such communities must have consistently participated in dialogue session and further deliberated in their sub-groups before reaching a consensus for every segment to come out publicly on any date chosen by them to stamp-out such tradition having recognised the harmful effects of such practice on their girls, daughters, sisters, wives, and mothers.

“What we are witnessing today is the outcome of various engagements, dialogues and advocacy meetings with critical segments on the immediate and long-term negative health and psychosocial consequences of FGM on the health of girls and women in the 24 autonomous communities by various partners and Civil Society Organisations(CSO).

“The journey toward ending FGM began in 2015 when UNICEF supported NOA to collaborate with Imo State Ministries of Health, Gender and Social Development, Information, and Child Protection Network to embark on the campaign promoting the rights and positive perception of the girl-child who has not undergone FGM as whole, healthy in body and mind, unharmed, intact and untouched” using the slogan “OdiNma Nwanyi Bu ka chi siri kee ya,” he said.

Ekeocha said that the Ministry of Gender and Vulnerable Group Affairs, through the Child Rights Department, was supported by UNICEF to inaugurate LGA Technical Committee on FGM(LTC) in Oguta Local Government area in September 2017.

He said the ministry had also trained prosecutors, the judiciary, police, and lawyers on FGM practices and extant laws that prohibited the practice with the view to ending the practice in October 2017.

Dr. Blessing Azubuike, who represented the state Commissioner for Gender Affairs and Vulnerable Group, said the declaration showed that the sensitisation on FGM had yielded the desired result.

She said that the aim was for the protection and well being of the girl-child and women, adding that Oguta was now one of the local governments that had registered their agreement on stopping FGM.

Mrs. Ukachi Uka, State Coordinator, National Human Rights Commission, said that FGM was against the rights of the girl-child as it inflicts pain and an infringement on her right to freedom from torture.

She also said that the practice degraded the dignity of the human person and rights to survival and urged the communities to abide by the declaration.