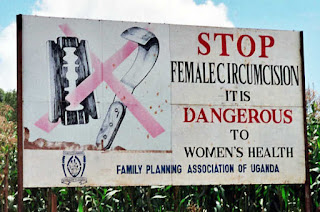 OWERRI (THIS DAY LIVE)--In line with the Imo State Female Genital Mutilation (FGM) Prohibition Law No. 6 of 2017, about 54 autonomous communities in two local government areas of the state have publicly declared the abandonment of the practice of FGM and warned those who intended to go back to the practice should be prosecuted.

The two local governments are Ikeduru and Oguta council areas, as their traditional rulers, president-generals, women and youth leaders, and religious leaders gathered in their respective council headquarters to publicly re-state their collective resolutions of abandonment of FGM in all the communities under them.

In their separate resolutions signed by Chairman of Ikeduru Council of Traditional Rulers, Eze Marcel Egemonu and Chairman and Secretary of Oguta Council of Traditional Rulers, Eze F.C. Okafor and Eze Albanus Ozuruoha respectively, said female genital mutilation had ceased to be a culture and tradition of the people of all the villages and communities in the two local governments.

According to them, “we the royal fathers of the various autonomous communities in the local governments and their entire people having been sensitised about the harmful effect of female genital mutilation, and having deliberated during several community dialogues and consensus building meetings, have recognised the immediate and long-term negative health and psychological consequences of FGM on the health of our daughters, wives, sisters, nieces and any other women who is subjected to this very harmful traditional practice.

“We also acknowledge that FGM is a denial of girls’ and women’s ability to fully exercise their human rights and to be free from discrimination, violence and inequality; based on these reasons we have reached a consensus to publicly declare; to leave our girls and women intact, because their beauty is preserved when they remain the way that God created them.

“To set up surveillance systems, in each community, to tract the birth of every girl-child and monitor them to ensure that they are not subjected to FGM, and to handover any community member who engages in FGM to law enforcement agencies for prosecution in accordance with the Imo State Female Genital Mutilation (Prohibition) Law 2017, or any other law prohibiting the practice in the State.

“Based on this public declaration, the practice of female genital mutilation is now forbidden in our local governments. We, hereby, urge everyone present today to publicise this decision to all the sons and daughters of the two local governments as well as our friends and well-wishers in Imo State and beyond,” they stated.

Expressing satisfaction over the decision to forbid female genital mutilation in their respective local government councils, the United Nations Children’s Fund (UNICEF), Chief of Field Office, Enugu, Dr. Ibrahim Conte urged the leaders of the various communities and villages in the council areas to maintain strictly the abandonment of FGM in their respective areas.

Conte, who represented by the UNICEF officer in charge of Child Protection, Mr. Victor Akachukwu said that the world body was happy to see this declaration of abandonment of female genital mutilation in the two local government areas saying “I want to say a big congratulations to you. If you abandonment FGM, we have keyed into the sustainable development goals (SDGs) tenets. After the public declaration, what do we do next is to monitor strict enforcement. We have to set up a surveillance team to monitor that is does not happen again in our areas”.

The leader of the abandonment of FGM sensitisation and Imo State Director of National Orientation Agency (NOA), Dr. Vitus Ekeocha described the publication declaration by the two local government leaders a broad social recognition which shows that the most people in the communities support FGM abandonment and would most like abandon the ugly practice, adding that the action marks a significant step in the campaign to end FGM.

He said that FGM being a social norm that regarded as collective representation of acceptable group conduct as well as individual perceptions of particular group conduct, therefore, they are viewed on cultural products which represent individual’s basic knowledge of what others do and think they should do, hence its abandonment should be a collective willingness.

Ekeocha recalled the process the UNICEF and her partners took to realise the declaration of abandonment of FGM proper being the outcome of various engagements, dialogue and advocacy meetings with critical segments on the immediate and long-term negative health and psychological consequences of FGM on the health of girls and women in the various villages and communities of the two local government areas.

According to Ekeocha, the journey towards ending FGM began in 2015 when UNICEF supported NOA to collaborate with the Imo State Ministries of Health, Gender and Social Development, Information, Child Protection Network to embark on the campaign promoting the rights and positive perception of the girl-child who has not undergone FGM.

He said “the Ministry of Gender and Vulnerable Groups Affairs through Child Rights Department was supported by UNICEF to inaugurate LGA Technical Committee on FGM (LTC).The Ministry also trained prosecutors, judiciary, magistrates, judges, police and lawyers on FGM practice and extant laws that prohibit the practice with the view to ending the practice.

He, therefore, reminded all the leaders in the various councils that having agreed that FGM is a harmful cultural practice; and not a religious requirement and has been abolished in all the villages and communities in the two local government areas, then the crucial role of mounting surveillance systems would established in affirming compliance.
Amby Uneze Igbo Culture Newsroom Owerri This Day