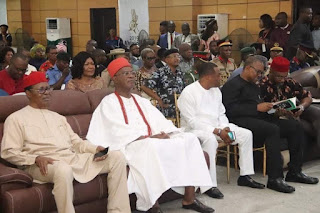 Events at the Ahiajoku Lectures. Image via Imo State Blog

Governor of Akwa Ibom State, Mr Emmanuel Udom and a former Minister of Aviation, Chief Femi Fani- Kayode were also in the city.

The personalities, and many others, were in Owerri for the 40thanniversary of the Ahiajoku Lecture Series. The lecture was delivered by Prof. Michael J.C Echeruo, who is the William Safire Professor of Modern Letters, Department of English, Syracuse University.

This is an eloquent testimony to the fact that the Ahiajoku lecture series, which was initiated by the governor of old Imo state, late Sam Mbakwe in 1979 ostensibly to celebrate the goddess of cultivation, fertility and harvest in Igbo cosmology, has transcended beyond its initial beginnings and become a pan-Igbo intellectual harvest. It not only spotlights contributions the Igbo have made and are still making to culture, civilization and to humanity but also serves as a platform which seeks to encourage Igbo scholars to undertake relevant researches on Igbo culture in relation to the world view and overall human development.

Therefore, the enthusiasm with which the revival of the Ahiajoku lecture series by Governor Emeka Ihedioha was celebrated by the entire Ndigbo after about a decade of hiatus was not surprising, especially as the event marked the 40th anniversary of the lecture series.

To kick-start the event, a colloquium was held. This was followed by a cultural night at the traditional parliament of the Imo State Council of Traditional Rulers where the guests were entertained by the Ome na Imo Cultural troupe.

“We must thank Governor Ihedioha for reviving this Ahiajoku Lecture Series and going further to make it an institute for research into the culture and tradition of Igbo people. In 1981 when I returned from the Netherlands to work as the regional manager of Shell in Port Harcourt, I had paid Chief Sam Mbakwe a visit in Owerri and he asked me if I established a village in the Netherlands and that every Igbo man must establish a village at his location. What I understood by what he said is that Igbo is a global tribe because you find them everywhere and in every discipline. One thing about a global tribe is focus and cohesion, and the Ahiajoku is a major platform to achieve this cohesion.”

Chief Femi Fani-Kayode commended the Imo State government for organising the event noting that the immediate past administration could not organise the intellectual event primarily because the head of that administration is anti-intellectual. He commended Governor Ihedioha for again providing a cultural platform for Igbo intellectuals to exchange positive ideas for the benefits.

“This is my first time in Owerri and I must say that I was impressed that Governor Emeka Ihedioha has brought back this Ahiajoku which most people have aptly described as an intellectual harvest.

The monarch of Umudioka autonomous community in Orlu, Eze Thomas Obiefule who was elated about the return of the lecture Ahiajoku series, said ex-Governor Rochas Okorocha had scrapped the lecture series but commended Governor Emeka Ihedioha for his foresight in bringing it back.

He noted that Prof. Michael Echeruo, the lecturer, had aptly entitled his lecture ‘OGU ERI MBA (WE SHALL SURVIVE)’ and that for the Igbo race to survive, the culture and tradition must be sustained.

“As a traditional ruler, I am very happy that the Ahiajoku lecture series is back which in the last 40 years has continued to provide Ndigbo with a platform to discuss and proffer solutions to the issues militating against our people. And if you look back you will see that illustrious Igbo intellectual giants, including the iconic Professor Chinua Achebe had in the past delivered lectures. But unfortunately, in the last eight years, the former governor, Rochas Okorocha, for reasons better known to him, scrapped the Ahiajoku Lecture Series and even renamed the Ahiajoku Convention Centre built by his predecessor, Dr Ikedi Ohakim to Imo Trade and Investment Centre. It was the same governor who destroyed all the artefacts at Mbari Centre. So, I am happy that Governor Ihedioha has not only revived the Ahiajoku Lectures but has made it an institute. Above all, he has made Igbo language a compulsory subject in the state because it is the language with which to identify our people.”

Director General of the newly established Ahiajoku Institute, Dr Amanze Obi said it was gratifying that after nine years, the event was back and better. He said the event would henceforth remain as a think tank for the way forward for the Igbo race.

“From now on, we are not just going to organise the lectures, but it will become a forum that will evolve into researching into and promoting the culture of Ndigbo,” he said.