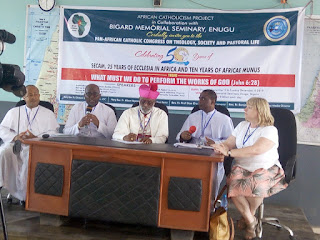 ENUGU, NIGERIA (CRUX) - According to a range of scholars at a Pan-African Congress on Theology, Pastoral Life, and Society, the pope’s metaphor for the Church as a “field hospital” provides particular resonance for the African continent - and, they say, must guide pastoral practice in the realms of education, liturgy, and the laity.

The pope used the phrase in his first major interview after his election in 2013 where he emphasized the need for the Church to respond to immediate and pressing needs of the people before less life-threatening concerns.

“It is useless to ask a seriously injured person if he has high cholesterol and about the level of his blood sugars,” he said at the time. “You have to heal his wounds. Then we can talk about everything else.”

During the December 5-8 congress at the Bigard Memorial Seminary in southeastern Nigeria, a number of the delegates relied on the pope’s metaphor to cast a vision of a church in Africa that encourages a reshaping of their ministries and programs more closely modeled after the pontiff’s method of dealing with a wounded flock.

Father Osita Asogwa, a lecturer in philosophy at Bigard Memorial Seminary, told attendees that the pope’s vision of a field hospital must focus on “pastoral care in concrete situations.”

Asogwa’s remarks focused particularly on the realm of education, and he encouraged a complete rethinking of the way it is approached in the African context.


Motivated by the pope’s call for greater missionary activity, Asogwa said the “good news must speak directly to the person,” with a particular focus on “renewal and revival.” He went on to add that education should focus on the “reality on the ground,” to better understand the field hospital in which the Church is operating and focus less on intellectual concerns and more on the need to speak to people about their particular sufferings and situations.

He criticized the fact that to this day, there are no pontifical universities in Africa - a question that he said he has posed to Roman curial officials, and it has gone unanswered. Further, he said educational programs have too often been shaped with the Vatican in mind, and that “Rome may not like it” is “a mantra that has killed most of our academic activities.”

For Professor Patrick Chibuko, chair of Sacred Liturgy at the Catholic Institute of West Africa, Francis’s lifestyle of simplicity and a focus on the margins “portrays the type of ecclesiology he is proposing to the Church.”

The field hospital, Chibuko maintained, “demands a corresponding liturgy in content and expression.”


Liturgy, he went on to argue, must appeal to the head, the heart, and the hands and that the appeal to intellect, emotion, and service must all be present. Chibuko also noted that liturgy could not be “strict and static,” but should reflect the life of the Church.

“It is, by nature, dynamic, since it is at the service of the Church,” he noted, adding that in the field hospital, liturgy cannot be only Roman but one that appreciated local culture and “helps Africans understand themselves.”

Dr. Nontando Hadeb, who teaches pastoral and systematic theology at St. Augustine College in South Africa, said that the field hospital of the Church must be outward focused and that the laity should serve as the “focal point of the hospital” and that programs and ministries should be shaped based on different needs and realities.


“Just like a hospital has different patients with different health needs, the laity is not homogenous. They have different needs, different voices, different wounds,” she continued. “They are the ones having to live in the world, and they represent different voices, the able bodied see things differently than the disabled, there are sexual minorities, there are the divorced, the remarried, and others. We have to listen to them.”

“You must walk with them and provide different solutions,” she concluded. “You can’t just give one medicine.”