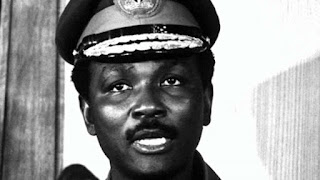 For Gen. Yakubu Gowon, there is no running away from his friend, Chief Emeka Ojukwu. They wined and dined together as young military officers at the Samaritan Club, Kaduna. They fought but are never apart.

Gowon was In Asaba recently where he met a new Ikemba, Emma Okocha, who is going to receive his title today from the Asagba, Prof. Chike Edozien. The former Nigerian leader has had sleepless nights over the Biafran genocide especially the atrocity committed by troops under him as Commander-in-Chief.

It was tough for Gowon. He had visited in 2002 to publicly apologise to the people. Then the general packaged himself as a prayer warrior. He still prays and led some of his band of pray masters to the Asagba’s palace.

Unfortunately, the Asagba was mourning his younger brother, Prof. Emmanuel Chukwuma, who passed on last October and was in no mood to receive any August visitor.

Gowon knew more than that. The Asagba was forced into exile during the Civil War by the Gowon regime. He first fled to France before relocating to The United States.

Gowon put shame aside and decided not to leave the palace until he was attended to. On a second thought, Her Royal Majesty, Ugwunwanyi , Modupe Edozien, went back to the Asagba.

The doors were flung open as the royals put heads together. When Gowon was told that the Asagba’s wife was the granddaughter of Herbert Macaulay, he marveled.

The general chipped in an amusing anecdote. “My elder brother looked very much like Herbert Macaulay,” he said.

Gowon thanked the Asagba for choosing to honour Okocha with the title of Ikemba Asaba. Still throwing banters with palace officials, he said the late Ikemba , Emeka Ojukwu, was his good friend and it was delightful to have another friend, Okocha as Ikemba.

The former Nigerian leader confessed not knowing the magnitude of the Asaba genocide until he read Okocha’s bestseller, ‘Blood On The Niger.’ And he apologized once again to the people and regretted not doing anything to compensate them during his tenure as Head of State.

It is glaring that even as Commander-in-Chief, Gowon did not know much about what transpired in the frontlines. And the GOC of the Second Division, Col. Murtala Mohammed, had little regard for his boss.

The October 1967 genocide was carried out by troops of that division. To be fair to Murtala, he was at his Operational Headquarters in Umunede when Maj. Ibrahim Taiwo led his battalion to destroy all able bodied men in Asaba.

Okocha lost siblings and other family members. Entire families were wiped out. Some accounts say the River Niger turned red as women were compelled to bury their husbands and children while Nigerian troops watched.

Right inside Gowon’s Kitchen Cabinet, there was a mourner. Philip Asiedu was Permanent Secretary, Ministry of Industries and had followed Gowon to Aburi, Ghana in defence of One Nigeria.

His younger brother, Sidney, was holed up in Asaba. Trained at the University of Nigeria Nsukka as a Zoologist, he was a great athlete and represented Nigeria at the Tokyo ’64 Olympic Games.

As a student of Igbobi College, Lagos, Sidney Asiodu was named Sportsman of the Year, 1963. He was Senior Prefect, Soccer Skipper as well as Cricket captain. All that did not matter to his killers even when they knew there was an Asiodu in Lagos married to Olajumoke, a daughter of Oduduwa.

Sidney Asiodu’s death did not spread the sad tale. For an Olympian and the fastest man at the First West African Universities Game in 1966, the academic community and the globe did not make any move.

It took the courage of Okocha to pen down what happened in Asaba just like things happened in other parts of Biafra. More touching was the revelation that Mrs Maryam Babangida’s father, Ogbueshi Leo Okogwu, was killed by a Nigerian Army Major when Babangida was also a major on the Nigerian side.

Okocha’s book got America involved. And today, the Asaba genocide is no more a footnote. It has become part of the dark moment of History. And we must not forget that the Asagba lived in America until he returned to Nigeria in 1991.

Emma Okocha does not see himself as the Ikemba of Asagba. He belongs to all Igbo and proudly displays his achievements as a prolific writer. He was Sports Editor of Jim Nwobodo’s Satellite newspaper and writes for Daily Sun.

While Gowon keeps frequenting Asaba in search of forgiveness, Col. Sani Bello keeps identifying with the Igbo. The latter was at the funeral of his business associate, Prof. Emmanuel Edozien, Ojiba of Asaba.

Bello as an Army Lieutenant, was Aide de Camp to Gen. Johnson Aguiyi-Ironsi when he was abducted by a bunch of blood thirsty other ranks in Ibadan. The first military Head of State was assassinated but Bello spared his Air Force colleague, Captain Andrew Nwankwo.

Gowon has his own story to tell. Those who toppled Ironsi to pave way for him also sent the former packing. Murtala took over in 1975 and was murdered by some people close to Gowon.

That almost cost Gowon his life. At a time he was stripped of his ranks and declared wanted. The military coordinator of Gowon’s wedding, Col. Iliya Bisalla, was executed.

Bisalla’s wife, Mildred, suffered. Her elder sister, Helen Gomwalk, was jailed for life. Her brother-in-law, Joseph Gomwalk, faced firing squad. Gowon’s elder sister, was married to a Dimka while Lt. Col Bukar Dimka was also executed. Okocha says Gowon is humble. I would not be surprised if Gowon turned up to celebrate with the man who made him see the Civil War from a different perspective.

Prof. Emma Okocha was crowned Ogbueshi Mkpagbu in 2014. He drank from the fountain of Dr. Dennis Osadebay.