Ihedioha: My Target Is To Make Imo Most Viable Economy By 2025 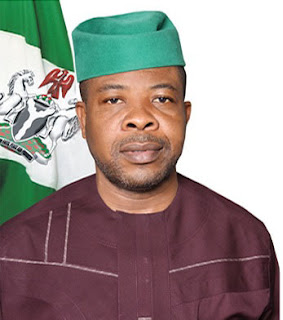 OWERRI (THE NATION)--Imo State governor, Emeka Ihedioha, has said that his efforts at rebuilding the state were targeted at making Imo to be one of the top most developed states in the country in five years time.

Ihedioha also said that within seven months in office, his administration had been able to restore effective budget presentation, reduce cost of governance, embarked on extensive road rehabilitation projects, deployed technology as an enabler for effective service delivery and carried out broad reforms in the state civil service.

“About the same period also, Imo State was appraised the Best Overall Performing State in ICT Development by the National Council on Communication and Digital Economy. Our comprehensive effort to deploy technology as an enabler for effective service delivery is yielding positive results. We have carried out trainings of our youths and

women, set up two ICT hubs in the state while the Digital Imo Project is on course”.

He added that another dimension in his administration’s reform process was that “we have revitalized the Local Governments for optimal performance. Today, they are receiving their full statutory allocations directly. Under our constitutional oversight, our 27 Local Governments are constructing standard secretariat buildings to provide adequate accommodation and conducive working environment for workers”.

Ihedioha told the stakeholders that his administration was poised to achieve food security and agricultural revolution in the State in line with its stated policy.

He said, “We launched a Youth-in-Agriculture programme and have

trained over 600 youths in various forms of agricultural production and agro-business skills. The Rice Mill in Ihitte- Uboma has been revived with Arondiuzogu mills coming up next January. This Christmas, many homes in Imo State would be eating rice planted, processed and packaged in Imo State.

The state’s ADAPALM is being revived while we have brought a viable investor for the Avutu Poultry Farm.”
Emeka Ihedioha Imo State Owerri The Nation