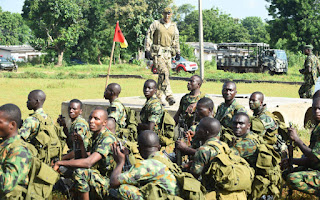 
Chief Samuel Ewoh Nnaji is the father of the late Nnameka Nnaji, who was shot dead by suspected kidnappers in military uniform at Gwagwalada along Lokoja-Abuja Road. He tells RAPHAEL EDE how the death of his son has devastated the family
How did you hear about the death of your son, Nnameka Nnaji?
My son was killed on December 8, 2019, very close to Gwagwalada, along with many others.

I received the sad news on the morning of Monday, December 9, 2019. My son was returning to Abuja from the burial of a friend he attended in Imo State. He was also in Anambra State. On his way to Abuja, some guys wearing army uniforms opened fire on commuters along Lokoja–Abuja Road near Gwagwalada. Unfortunately, he was one of those killed.

I didn’t hear the news of the incident on radio or read about it in the newspapers. There have been cases of such horrific and gruesome murder of Nigerians by bandits said to be herdsmen at the nation’s capital. The type of government we have now does not investigate when such things happen. Some of our people were kidnapped in the same area before my son experienced it. Our people who were kidnapped were working at Aninri Local Government Area of Enugu State. They were going for a seminar when they were abducted. They spent many days in the bush before ransom was paid for their release. Had it been they kidnapped my son and demanded ransom instead of killing him, it would have been better. He was a promising businessman.

Has he been buried?

Yes. Our people in Abuja brought his corpse to Amechi here. We buried him on December 18, 2019.

How do you feel about the incident?
I feel so despondent about this country of ours. It is only in this country, under this government, that such a thing will happen and the federal, state and local governments will not ask questions let alone commiserate with the affected family. Apart from journalists, no one is asking questions about how Nigerians are being killed in their prime. Just like this happened, so many others have happened without our government questions. It is not asking why people are being killed on a daily basis on our highways. It is only killings of people we hear about every day in Nigeria; it is regrettable.

The President [Major General Muhammadu Buhari (retd.)] should consider the type of country he will leave behind. We are not safe in our homes and when we are on the road, or going from one state to another, we are also not safe. What caused it? Are we fighting another civil war? If there is no war, why are some people killing others daily and the various governments are not asking questions? They have kept quiet as if nothing is happening and it is painful. I beg the government to re-strategise on how to save the people from these tragic deaths ravaging the country. What is the need of calling Nigeria a country when nobody asks questions when people are killed? It simply means that we don’t have a government.

So, I am calling on the government to find the people who gruesomely murdered my son and others in cold blood for no reason.

How tough has it been for you to deal with this loss?

There is nothing I can do; who am 1? Many other people have been killed and nothing happened. I cannot fight somebody I don’t know. If the government of Nigeria cannot do anything to protect Nigerians, who am I and what can I do?

Since the incident occurred, I have not been sleeping. To have a son of that age taken away from me by fellow human beings is painful. Do you think I am in a good world? I am in bad world but I think it is something that doesn’t have a remedy in Nigeria because killings have become a norm under the All Progressives Congress-led Federal Government. I don’t sleep and to tell you the truth, there is nothing I know that I can do than to take it to God in prayer.


How is your wife coping?

What can we do? She is crying every day. We are praying, asking God to save us from this demonic and misrule in this country. We had not seen such a thing in Nigeria before; it is only recently that these things are manifesting. I am 74 years old and have lived in this country all my life. I never saw something like this even during the Nigerian Civil War. Our situation then was better than the situation we have now in Nigeria.

What plans are in place to take care of the family he left behind?

I will start work again. I trained my son, thinking that I would rest later in life. I will start from where I stopped. It is not the normal thing but I have no other choice.

What do you want the Muhammadu Buhari regime to do?
The Federal Government should save those of us that are still alive. Such a thing should never happen again; they should protect us. That is why we have government. That is why they are there to look after us. Should we stay in the water and still have soap lather getting into our eyes? The economy is bad, but life is still the most important thing to a human being. It is only when you are alive that you can talk about a bad economy.

All rights reserved. This material, and other digital content on this website, may not be reproduced, published, broadcast, rewritten or redistributed in whole or in part without prior express written permission from PUNCH.
Interview Newsroom Punch Raphael Ede