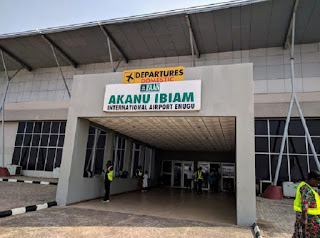 ENUGU (THE NATION)--Akanu Ibiam International Airport, Enugu, may not open soon as expected despite resolving safety concerns that led to its shut down by the Federal Government.

This is so because a fresh crisis over ownership of adjoining land at the airport is threatening its reopening.

There is a land contest between a private estate developer, Arch. J.J Emejulu and the Federal Airport Authority of Nigeria (FAAN), which, according to the airport authorities, may jeopardise moves to reactivate the airport.

The land dispute is based on series of unconnected court cases in which Arch. J.J Emejulu is seeking to exercise ownership right over spaces of land in the vicinity of the airport.

A source at the airport also stated that conflict between the Nigeria Police and the Nigerian Air Force attached to FAAN over land ownership is also there.

The source stated that the airport might be permanently closed down if there is encroachment into the reserved space.

According to an FAAN official at Enugu, the contested land is located at the takeoff end of the airport, and would breach safety headroom for planned extension of the runway.

In response to enquiries on the encroachment, the Chairman of House Committee on Aviation, Hon. Nnolim Nnaji, declared that nobody would stand in the way to reopening the airport as scheduled, warning those fighting for land to stop sabotaging the interest of the Southeast zone.

Also, the erstwhile President of Southeast and Southsouth Professionals, Mr. Emeka Ugwuoju, advised all parties in the land dispute to concede their personal stakes to public interest.

He stressed that the ongoing rehabilitation and upgrade of the Akanu Ibiam International Airport remains strategic to the economy of the region.

According to him, all government institutions and facilities are built on land acquired from original owners in public interest.

He wondered why acquisition of lands for development of critical development infrastructure would be a major issue in Enugu State.

He stated that anybody taking actions that would affect the reopening of the Enugu Airport is an instigated agent working against the people of the entire southeast region.

It would be recalled that the predicament of the Akanu Ibiam International Airport began with a declaration by the Aviation Minister, Hadi Sirika, in May that the airport would be downgraded due to safety and facility deficits.

He listed some of the safety concerns to include bad runway, closeness of a market and birds attracting-abattoir, and an aviation focused free trade zone.

But in a concerted tripartite agreement, the Enugu State Government, Ministry of Aviation and the National Export Processing Zone Authority (NEPZA) smoothly resolved all observed concerns about the airport, leading the minister to declare rehabilitation work at the airport.

Managing Director of FAAN, Capt. Hamisu Rabiu Yadudu, had expressed satisfaction with the relocation of the Orie Emene market, abattoir, and the dismantling of the Enugu State Broadcasting Service (ESBS) Radio/TV mast.

Yadudu said the issue of the ENPOWER Free Trade Zone has also been resolved with its Chief Executive Officer, Engr. Emeka Eneh, during the inspection.

He declared that “the required land FAAN wants to protect is secured” for safety and security, adding: “We are happy with that and ENPOWER Free Trade Zone is also happy that with the remaining land, they can still go ahead with their initiative and develop the land.”

Despite the resolution of the issues, the airport was shut down on August 24 due to bad state of the runway and other navigational facilities. After series of high profile visit by southeast governors, President Muhammadu Buhari expeditiously approved N10 billion for rehabilitation and upgrade of the airport.

A construction firm, PW Limited, has been deployed to reconfigure and reconstruct the runway to accommodate wide body aircraft including the Boeing 787 and dreamliner series.

National Aviation Management Agency (NAMA) has also announced commencement of work on airfield lighting and safety systems as well as on modernization of the terminal building and new reopening deadline was fixed for April 2020.

Hon. Nnaji stated that the entire southeast region would rise against anyone that might be working with enemies of the zone to sabotage the prevailing presidential fiat on speedy rehabilitation of the airport.

Mr. Ugwuoju advised those whose land might be affected by the developments at the airport to approach the government for resolution of the issues in line with established provisions.

He warned that sustained bickering over the land would derail the prevailing momentum for reopening of the airport.
Emeka Ugwuanyi Enugu Francis Akanu Ibiam Newsroom