South-East Governors And Politics Of Development 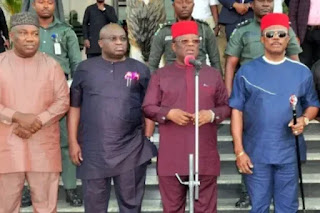 Politics, according to bookmakers, is the contestation of power and authority. Politics embodied in human existentialism, has defined and redefined man activities, in cyclical form, since creation. It has instinctively become part of man’s DNA to engage in political intrigues, albeit willfully and unwillingly. This narration probably must have inspired Great Aristotle, in his legendary literary works, to classify man as a political animal, whose first need in nature, is survival.

The crafters of political philosophies, principles and rules, knew that without checks and balances rolled in written and unwritten principles guiding the game of power play and how it is dispensed, for the good of all, human cravings have the insatiable tendencies of tending to the extremes. These postulations gave rise to distinctiveness of politics into two major characteristics: constructive and destructive. The easiest way to decipher the type of politics dominant in a state, region or country, is to take a close look at how its politics positively robs off on its governance quality, which ultimately dovetails to development.

Flowing from this trail of thoughts, I decided to scrutinize the politics of South-East Governors’ Forum vis-a-vis its rosy relationship with President Muhammadu Buhari, especially when juxtaposed with voting pattern of the zone in the last two general elections. There is no gainsaying that Mr. President, since his sojourn into partisan politics in 2003, has never been popular in the southeastern flank of the country. Even when he chose sons of the zone as his running mates in 2003 and 2007, respectively, yet, it did not sway voting sentiments in the region in his direction.

Governors Ifeanyi Ugwuanyi of Enugu State, David Umahi of Ebonyi State, Emeka Ihedioha of Imo State, Okezie Ikpeazu of Abia State and Wille Obiano of Anambra State, collectively, have been able to rise above tribal and party politics to establish a healthy relationship with President Muhammadu Buhari, of which is necessary for development to thrive. That the five governors of the zone, are of the opposition parties, arouses more curiosity in the minds of discerning political keen observers, especially those from the zone. South-East Governors Forum has been able to bridge the yawning gap between the people of the region and the Presidency. It takes uncommon wisdom to connect two extremes on the same ideological spectrum, without hurting either interests.

Some people are unreasonably disappointed that South-East governors are not antagonising President Buhari in the cloak of opposition politics, at least publicly. Rather, they have adopted political diplomacy in handling issues affecting the region—and, it has been proven to be working. Its results can be seen in the ongoing rehabilitation of Akanu Ibiam International Airport, Enugu-Port Harcourt road (two lanes), continuation of work on Second Niger Bridge, etcetera, made possible by adequate funding via prompt capital releases.

Recently, South-East Governors Forum took advertorials in some major newspapers to tell President Buhari that: “we are grateful”. The Forum appreciated the President for keeping to his words of promise made to stakeholders of the zone, regarding rehabilitation of key infrastructural facilities that are of socio-economic importance to Ndigbo. Chief of Staff to the President, Abba Kyari, Minister of Works, Babatunde Fashola and his Aviation counterpart, Hadi Sirika, were also acknowledged in the advertorials.

Unfortunately, propagandists, who are purveyors of politics of hatred and destruction, began spinning the sincere message of appreciation, made by the governors, to the President. Their ill-fated mission, as usual, is to incite Igbo populace against their leaders. They have termed the Governors’ message as “sycophantic”, “slavish”, “praise-singing” and so on. These irrational critics opined that South-East Governors Forum condescended low, by massaging egos of the President and his close aides, to do what should have been their constitutional responsibilities, regarding South-East.

The same assertion was made by these social media bees, when President Buhari approved N10 billion naira for the rehabilitation of Enugu Airport. They propagated the jaundiced narrative that South-East governors should not have gone to Villa, “cap-in-hand begging” Mr. President to approve funds meant for Enugu Airport—which was closed down for operational deficiency. They have insinuated strongly, riding on their propaganda machinery, that President Buhari has “intimidated” South-East governors into capitulation. And that is why the President is not being maligned by governors of the zone. This is not only fallacy but height of conjectures exemplified in mischief.

I had had occasions of criticising South-East governors, and even coming hard on the President (you can google some of my past articles), but, at this juncture, I think there is limit to criticisms. I did not vote for President Buhari in the last election (of which I reserved that right of choice), but he remains my president. Supreme Court has affirmed so—not minding my reservations. 2019 electioneering and its resultant shenanigans, is over. And so should grandstanding associated with it.

Politics of development as being shown by South-East Governors Forum, should prevail over destructive politics of bitterness. Its time to move on. Ndigbo should not see cordial relationship between South-East Governors and President Buhari as a sign of weakness on the opposition governors. Rather, it is a hallmark of political maturity highlighting strength.

An average Easterner is not interested in whether South-East governors got approval for the release of funds to reconstruct Enugu Airport, dilapidated federal roads, etcetera, in the zone, on their knees (if there is anything like that). We are only concern about development of the zone. If political diplomacy—if you like: call it sycophancy or praise-singing, is the strategy that works for the governors, in attracting federal presence to the zone, so be it.

Ndigbo need development not bitter politics, that creates more enemies for us. Naysayers and obstinate critics, should know that Buhari is not an enemy to Ndigbo but our president. We might have disagreed with some of his actions and inactions in the past, but that does not entail that our minds have been conditioned to dislike anyone associating with, especially when that relationship is in our best interests—as being demonstrated by South-East governors.

If it takes a thousand “we are grateful” to get our ailing infrastructures fixed; the zone adequately represented in terms of appointments, I stand with South-East Governors Forum! There is time for everything under the sun. It is time for constructive politics of development not opposition just for the sake of it.