The Needless Media War Between Okorocha And Ihedioha 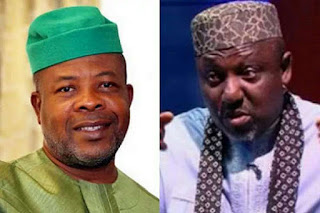 
The spate of tirade of abuse and antagonism between the immediate past governor of Imo State, Rochas Okorocha, and his successor and former Deputy Speaker of the Federal House of Representatives, Emeka Ihedioha, was re-enacted during the assemblage of Igbo leaders of thought and other national leaders in the recent Ahiajoku outing. It reached a damning crescendo when the Imo State Chairman of the Recovery of Government Properties Committee, was allegedly assaulted in the course of duty by supporters loyal to the former governor at his Spibatt Avenue residence, in Owerri. Still in their usual characteristics, the abysmal handling of the imbroglio by the special advisers on media of the duo left much to be desired. The adversarial nature of the conflict which has resulted in growing polarity between their teeming supporters since the coming to power of Ihedioha’s government is traceable to the penchant to bellicosity than approaches to good public relations and crisis management by their special advisers on media.

It is quite unfortunate that most political special advisers on media in Nigeria share the same pedigree with Adolf Hitler’s minister of popular enlightenment and propaganda, Paul Joseph Goebbels, (1897-1945), with their firm grips over the press during and after their principal’s exit from power. It is on record that Hitler’s virulent anti-Semitism stance and World War II atrocities and wickedness in Europe was Goebbels’ irresponsible and malevolent public relations recipe. In trying to defend the indefensible, most public relations practitioners smear unfavourable, indelible, vitriolic publicity not only on themselves but also on the very personality, product or service they are paid to propagate.

It appears that Okorocha and his indefatigable media adviser have succeeded in taking the war of attrition to Ihedioha and his government. The grand ploy is to use the media to advance his cause as a gudgeon of political victimization and vendetta. It should be rightly emphasized that there is nothing wrong for a government that succeeded Okorocha to demand for eight years report on his stewardship in the State he imperiously held sway as a monarch. In exercising his executive authority, the Civil Service, Agencies and Departments of the State were virtually grounded. As a matter of deliberate policy and grand design to short-circuit governmental apparatuses, he failed to carry the bureaucrats along. He claimed to have given Owerri Municipality a facelift, just one out of the 27 Local Governments in a crude oil revenue-earning State. What other good report is he showcasing for the remaining 26 LGAs of the State in terms of Rural Development, Industrialisation, Science and Technology, Youth empowerment and employment, etcetera?

In his style of political administration, even the Legislature was an inconsequential arm of government and he spared no effort in making the elected representatives of the people a ridiculous bunch in the enviable annals of a State known for her robust legislative history. Throughout the duration of his government, he left no one in doubt that members of his cabinet who constituted the executive arm of government were merely used as political pawns in order to give it a semblance of altruistic leadership. In a State providently blessed with world class technocrats and the intelligentsia, it is ignobly on record that executive functions were either performed by his children, son-in-law, and siblings or by himself. For complete eight years, Imo State was governed by arrant guesswork. There was no conceivable Blue Print for its sustainable development. Obviously, where there was no clear-cut planning, it would be Herculean preparing a handover note to a successor since executive portfolios existed notionally. Suffice it to say that every yardstick in the indices of socioeconomic development such as youth employment, rural development, care for the aged through prompt payment of gratuity and pensions, full engagement of the factors of production, qualitative healthcare delivery system, inflow of Foreign Direct Investments, etcetera, were conspicuously non-existent. Even the much touted free education policy which was one of the basic pivots on which his Rescue Mission government was pillared ended up being a monumental failure for lack of qualitative ingredients for its diligent prosecution and sustainability. In Okorocha’s model of free education, unlike that of Lagos State Government where it is working perfectly, the teaching component, being a critical factor in the superlative actualisation of the laudable idea were starved of motivation which is intrinsic to pedagogy thus resulting in the obvious disconnect in the teacher and student relationship.

In the practice of Public Relations, the piper does not dictate the tune and if it is not premised on truth and integrity is bound to backfire. The negative multiplier effect is to the detriment of both the practitioner and his principal. Goebbels and his wife in trying to keep faith with Hitler based on transparent falsehood, took their own lives after poisoning their six innocent children. World War II ended with Hitler committing suicide with his wife, Eva Braun. The watchword of a good public relations practitioner is the adoption of a wide variety of techniques in presenting his employer in a favourable light to the public based on integrity and the absence of which he is very much obliged to throw in his towel for good. Good name is by far better than silver and gold.

A good public relations practitioner with political media advisory portfolio aptly shapes public opinion on major political and social issues with insistence on his principal to be on the side of the people through the provision of democracy dividends. He is not only the eyes and ears of his principal, but also the stand-alone pressure group of the people for the holistic benefit of the stakeholders in the polity. Muckraking in public relations which is exactly the role being played by advisers on media gulps resources. Agencies investigating public office holders in the country should extend same to their muckrakers because to say that they operate on deep pockets is an understatement.