Should We Listen To Danjuma? 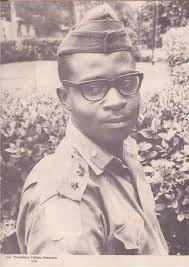 One of Nigeria’s retired major generals, Theophilus Yakubu Danjuma, recently announced to the chagrin of a number of youths like myself that should he talk about Nigeria, we would, like Shakespeare’s Macbeth, sleep no more. One may wonder what the billionaire general has to say this time, however, for me it’s just a load of gibberish and here’s why!

This nation’s problems began with the likes of TY Danjuma, a military coup had just taken place by young officers who felt that the likes of Sardauna, Balewa and a number of top citizens were the problem with the newly formed nation. To counter these young officers, senior officers like Aguiyi Ironsi mustered loyalists and crushed the coup in the South, arrested the culprits and slammed them in jail. He, Ironsi then sought to pacify the nation and unite the country, perhaps he was a bit idealistic, perhaps he was naive, but the Ironsi I read about never harbored any dreams of Igbo domination of Nigeria, all he wanted was a united Nigeria, a concept which eludes us till this very day.

To allay fears of the people, Ironsi began a tour of the regions, rather than impose such a unitary system on the nation by fiat as other military leaders afterwards did. Against warnings of a counter coup, Ironsi, who was one not known for shirking his responsibilities over some feared putsch, continued with his tour and landed in Ibadan.

In Ibadan, TY Danjuma arrested Ironsi alongside Colonel Adekunle Fajuyi, military governor of the West and Ironsi’s host, in a manner unbefitting for a gentleman officer. Ironsi and Fajuyi were then beaten by junior officers under the instructions of TY Danjuma before they were both dispatched to the great beyond by busts from machine guns. What was their offense, Ironsi was accused of participating in the January 15 coup, a coup he himself had quelled and risked his life in such course. For Fajuyi, his only crime was insisting that wherever they took his supreme commander, he, as his host, would go. Should TY Danjuma have also killed such a man for exhibiting such chivalry and living up to the brother code of military officers?

Can Danjuma kindly explain his role in the pogroms that followed? After all, he was a ring leader in the coup that removed Ironsi, but killing Ironsi was not enough, they had to kill every Igbo officer and soldier before moving to the civilians. Danjuma, the officer, was obviously a cheer leader!

His rise as a military top gun was meteoric, soon he was to be Chief of Army Staff and one day ordered that soldiers go and bundle one bloody Fela. He was the ‘Unknown Soldier’ in Fela’s song of how his home was invaded by soldiers throwing his mother out of the building and maiming a number of other civilians.


Other perks were to follow, obviously the counter coup of 1966 ushered in the era of the billionaire generals, you name them; Obasanjo, Yar Adua, Abacha, Babangida, Gowon and Danjuma, made their money the Nigerian way, throwing the citizenry into shameless poverty and destroying the psyche of the people, such that when Shagari came to power, he lamented that he met an empty treasury that the political class of 79-83 sought not to be found lagging in the race to swamp out the commonwealth to their private pockets.

Fast forward to 1999 and Danjuma found his way back to the corridors of power. He had earlier threatened the whole nation that he would go on exile should Obasanjo not win his first term in office as a civilian president and was justly compensated for such scaremongering with the portfolio of the Defence ministry. The massacres of Odi and Zaki Biam are still fresh in our memories, presided over by Danjuma.

So, I laugh when someone like him turns around to cry wolf about talking and no Nigerian would sleep. It is obvious that Danjuma is up to some form of mischief since he fell out with the Buhari administration over the issue of oil wells. You see, the Nigerian establishment or should I say, the ruling class have a habit of not talking while eating, for as long as there is something to eat( apologies to Sunday Afolabi) it is bad manners to castigate such a government but remove the venison from their mouth and you will be greeted with all manner of protestations!

In such protestations, the likes of Danjuma portray themselves as canonised saints. They blame everyone but themselves for the sorry state of the country; there is an infusion of the theatrics and an appeal to crass sentiments while labeling other ethnic groups as cowards. All they see are imaginary fifth columnists because no one seems ready to buy into their hogwash like tales.