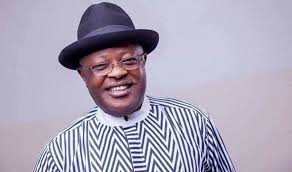 Ebonyi state governor, David Umahi, has said for the people of the South-east geopolitical zone to make headway economically, they must pool their resources together.

Umahi, represented by his deputy, Dr. Kelechi Igwe, made this submission Thursday in Enugu during the 4th South East Economic Summit (SEES) that took place at the Base Event Centre, Enugu.

Umahi, who is also the Chairman of South East Governors Forum, said South-east could achieve economic growth by pooling resources together to achieve a common goal.

He lamented that Nigeria spends billions of US Dollars to import salt whereas Ebonyi state has abundant salt deposits which if tapped would generate enough wealth for the zone, should they pool resources together to explore the large salt deposits.

“$23 billion US Dollars was spent on salt importation to Nigeria in the last 10 years,” he laments.

Umahi also suggested that South-east could invest where they have comparative advantage like in Agriculture. He said that for the zone to maximise revenue, “we must maximise our potentials.”

“Why can’t our politicians cooperate? Why can’t our governors come together and say, let’s embark on one project?” he wondered.

“Are we going to wait for this place to be completely deserted before we do something? If you want to move fast, you move alone but when you want to get things done, you do it together,” he continued.

A resource person, Professor Chidi Onyia, former adviser to the Minister of Power and team leader, DFID – Nigeria Infrastructure Advisory Faculty (NIAF) Programme 3, said having laudable ideas had never been the problem for economic growth in the zone but the inability of Igbo leaders to take bold steps to achieve a common goal.

Onyia said political leaders could look beyond election promises and move to something tangible that would better the zone.

“The issue has never been lack of ideas but for the policy makers to be honest to set up a financing process for the East. We should look beyond election promises. If risk exposure is not too much, people will invest. We should move from political sound bite to real implementation,” he posited.