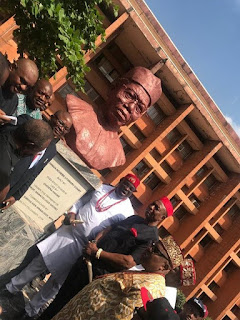 Commissioning of the Chinua Achebe Literary Court by the Dean, Fculty of Arts, Prof. Nnanyelugo Okoro. Image via Vanguard

NSUKKA (VANGUARD) — The University of Nigeria, Nsukka, UNN, has inaugurated Chinua Achebe's Literary Court to promote artistic creativity amongst the students of the institution.

The institution, Thursday, said the idea behind the court is to create a condition that would ignite creativity and Literary art competitions amongst the students in order to produce more Achebes.

Speaking after the inauguration of the court in the Faculty of Arts, UNN, which was also part of the activities to mark the 3rd Distinguished Personality Lecture of the Faculty of Arts, the Dean, Prof. Nnanyelugo Okoro, said "Chinua Achebe stands for arts. His immense contribution in this Faculty is invaluable.

" We decided to inaugurate his court in order to promote and ignite other Literary arts competitions amongst the students of this institution. We want to promote prose, poetry, drama and other literatures generally speaking. The idea is to ensure that UNN produces artists in the like of Chinua Achebe, and even people that can surpass his records," he said.

Okoro, also proposed Chinua Achebe Study Centre, which he said would be headed by a professor whose chair would be endowed by an institution, corporate organisation, a foundation or an individual.

He added that the centre, given Achebe's towering scholarly stature, would attract scholars from all over the world who would visit the centre to impart knowledge on the students, adding that the it would also generate revenue for the development of the nation.

While delivering his lecture entitled ' Re-engineering Igbo Apprenticeship Model in Era of Digital Economy' the lecturer, Engineer Ken Nwabueze, said the lecture became imperative in order to align the old Igbo apprenticeship approach which revamped the economy of the South-east in the 80's to be in line with the present digital economy era.

He added that the model is the longest and perhaps the largest informal capitalist venture in the world which has continued to reduce mass-scaled inequality and elimination of abject poverty in any society.

"Igbo apprenticeship is a model that needs to be studied, analysed, and innovated to keep up with changes in business environment and technological advancements. The lecture will focus on looking at comparable models around the world, especially, the venture capitalist models used in building up wealth in US, China, India, and so many other countries.

" The Igbo Apprenticeship model is model is the longest, and perhaps, the largest informal venture capitalist system in the world.

In order to re-engineer this model in this era, we need to identify those challenges with the current model and possibly proffer solutions for the present digital economy," he said.

He said that acts of sabotage and corruption has marred the system as being practiced today.

He said the model can still be used to engage the unemployed graduates in Nigeria today, by mentoring them to explore opportunities in the ever changing world of the digital technologies.

Earlier in his welcome address, the Vice Chancellor of the institution, Prof. Charles Igwe, said academic lectures are needed for effective collaboration between the town and gown in order to find solutions to challenges facing the nation.

The Vice Chancellor who was represented by his deputy, Prof. James Ogbonna, described the lecturer as an experienced entrepreneur whose vast knowledge would be needed in mentoring the youths towards securing a better future for themselves.
Chinua Achebe Igbo Ikechukwu Odu Newsroom Vanguard