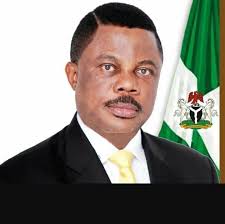 AWKA (PUNCH)--Governor Willie Obiano of Anambra State has announced a free medical scheme for ex-Biafran soldiers in the state.

He said the gesture was part of the activities marking the 50th anniversary of the Nigerian Civil War.

The war, which lasted from 1967 to 1970, was between pro-secessionists of the defunct Eastern Region led by the late Chukwuemeka Ojukwu and the Federal Government.

He said also included in the free health scheme were former players of the Rangers International Football Club of Enugu who played for the team between 1970 and early 1980s.

He said, “This is in recognition of their pre-eminent role in lifting up the spirit of Igbo people at the end of the civil war.

“The veterans are, therefore, required to register with the state health insurance scheme. A committee to conduct a census of the veterans is to be set up shortly under the leadership of Air Vice Marshall Ben Chiobi (retd.).

“The committee has one month to submit a list of all the veterans in the state regardless of whether they are indigenes of Anambra State or not.”

Adinuba added that since Obiano assumed office in March 2014, a large number of people had approached the governor for financial assistance for the veterans, just as many of them had been soliciting help directly.

“Most of the veterans are now old and frail and a good number of them suffer from various disabilities as a result of gunshots and other war-related experiences. In other words, they cannot fend for themselves and many of them do not have relatives rich enough to take care of them.”