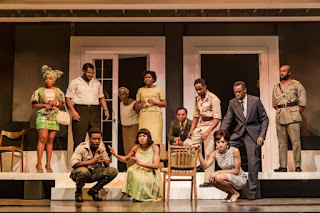 Quite possibly in response to the vacuity of the times in which we live, the National Theatre seems to have adopted a policy of staging very long, cerebral and earnest productions. Inua Ellams' adaptation of Chekov's Three Sisters - running to three and a quarter hours - is a prime example.

Ellams has relocated the story from provincial Russia at the turn of the century before last and plonked it down in Nigeria between 1967 and 1970 during Biafra's attempted secession. An interesting conceit, but I fear not one that can be altogether sustained. I've no doubt that Chekov, who wrote this play in 1900, would find it perplexing.

I don't say that Ellams hasn't got some interesting points to make about British neocolonialism, but it would have been a lot more straightforward, if not also honest, to have just started a new play from scratch than to try to weld all his ideas on to an existing classic. He may say it's a "new play" that he has written "after Chekhov", but it feels as if he just hasn't the courage of his own convictions to do his own play.

The setting is a village in Owerri, where three sisters, sitting on the porch of their home, think back longingly to their halcyon days in Lagos. The sisters are pretty much the same as the sisters in the original. There's Lolo, the teacher, played by Sarah Niles; Nne (Natalie Simpson), the married middle sister who is engaged in an affair with a military commander; and Udo, (Racheal Ofori), who is the youngest and slowly becoming reconciled to never fulfilling her potential.

A lot of the friction of the original was about social class, but it is now about tribal hostility. The failure of Nne's marriage is now down to the fact it was arranged in accordance with tribal tradition when she was 12. It may all be very clever, but it feels clever for the sake of being clever.

All of the conflict and violence that inevitably comes with the setting is hardly in keeping with the spirit of Chekhov. He was famous for writing plays in which not a lot happens but a sense of despair gradually descends upon his characters.

In Nadia Fall's production, the focus is less on the characters and the mood than all the stuff that is happening.  The acting is uniformly excellent and Katrina Lindsay's sets and costumes are impressive, but ultimately it's the idea behind it all that just isn't strong enough.

I might add, too, in these bleak times, the National Theatre should be in the business at least just occasionally of instilling spirit and hope in the citizens of a largely disillusioned and demoralised capital. This was clearly never going to do that. I look ahead to the productions being staged in the New Year and I see no grounds for optimism. Opening towards the end of January is a show called Death of England.