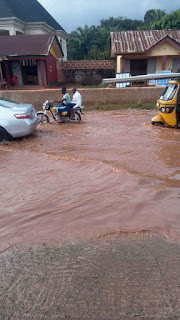 The mourners had come to claim the corpse of their dead relation but the ambulance could not enter the premises of the community general hospital due to the state of the road in the area.

The hospital wards now look like a shadow of the past when it used to receive patients from far away towns such as Onitsha, Awka and parts of the towns in Imo State.

A truck carrying tubers of yam got stuck along the market road and a long line of vehicle traffic had been formed and commercial activities had been stopped by the traffic.

“We don’t understand if we are part of the state. Just look at our roads. This is what we go through every day because of bad road. Something should be done about our roads.

“This is the trauma the people of Ekwulobia town in Aguata Local Government Area have been facing so far and during every general election candidates frequent the area canvassing for votes.

“They make promises of providing social amenities for the rural dwellers only to practically forget those promises leaving the people to their fate”, said a concerned resident.

On that fateful day, red cap title holders in Ekwulobia came out in their numbers to take reporters round the town.

They explained that it was not a protest against the Anambra State government but a passionate call on the government to look into their plight as a people.

“The general hospital was built before the Nigerian Civil war and it used to serve so many towns in the Old Aguata which is now made up of the present Aguata, Orumba North and South Local Government Areas.

“Recently Gov Willie Obiano sent some hospital equipment to the hospital but we do not even have power in the hospital and the power generating set has parked up long ago.

“People no longer patronize the hospital anymore and most medical personnel do want to come and work here because of the hopeless state of the medical facilities.”

Chairman of Agba village in Ekwulobia town where most of the roads have fallen, Prince Peter Michael Ezekagha, lamented that the roads were first awarded twice when Prof Charles Soludo was Central Bank of Nigeria governor and later awarded again under the regime of Mr Peter Obi as governor but the contractors never mobilized to site.

“As I speak with you, over 300 houses would be washed away by flood in the coming rainy season this year if nothing is done before then.”

He noted that Obiano had announced the construction of 12 kilometres of roads in Ekwulobia and the contractors said that work would commence within six months but it is getting to a year now and nothing is on ground to show for.

Pa Hycienth Onegemechi is in his early eighties and has been doing business in the town all his life.

He recalled that Ekwulobia market used to be the commercial hub of over 70 towns accross Anambra, Imo and Abia states, being a boundary town, adding that it used to be the largest market for Palm oil, palm kenel, timber and building materials.

“We are losing patronage due to lack of facilities in the market like electricity, water supply and the terrible state of the roads within the market.

“Recently, the Anambra State government had to put street lights in some areas and we thank the governor for that but a lot of things need to be done.

“Our town is the fourth major town in Anambra State but it is yet to have that urban status. This town shares boundry with Oko town where we have the Federal Polytechnic and the home of former Vice President, the Late Dr. Alex Ekwueme.

“We voted for the governor massively during the last election and he knows that the town is an APGA town.

“Yes, we have benefited from the governor’s ‘choose your project scheme’ and we executed two and we are waiting for the third phase of the scheme but it is not enough.

“We need transformers and water scheme in our community, so that we can enjoy those amenities already provided by government.”

There appears to be signs of better days ahead following the construction of St Peters Bishop Court road, which is undergoing asphalting and according to the Special Adviser to the Governor on Community and Chieftaincy Matters, Bar Vera Okonkwo, no part of the state is being marginalized by the administration of Obian. He said that in the case of Ekwulobia town, all the projects flagged off by the governor would be completed on time.

“The state government has concluded arrangements for the physical upgrading of the General Hospital in Ekwulobia and very soon it would assume the status of a Specialist Hospital in due time,” he said.