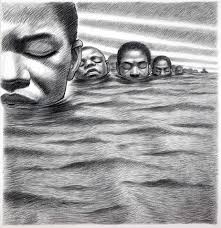 
As we celebrate Black History Month, we want to pay our respect in remembrance of Igbo Landings, which is a historic site at Dunbar Creek on St. Simons Island, Glynn County, Georgia. In 1803 one of the largest mass suicides of enslaved people took place when Igbo captives from what is now Nigeria were taken to the Georgia coast.

The Ibo or Igbo people were found in Southeastern Nigeria and have many interesting customs and traditions. The Igbo were found to be fiercely independent and more resistant to chattel slavery than slave owners in the American South were used to.

In May of 1803, the Igbo and other West African captives arrived in Savannah, Georgia, on the slave ship the Wanderer. The group of 75-85 Igbo’s were then purchased by John Couper and Thomas Spalding, slave merchants, for plantation work on St. Simon’s Island and transferred to another vessel named The York.

On their way to St. Simons, they were stripped and put in chains. They discovered that they would be chattel servants and when the boat docked the slaves realized that this was some type of cruel trick, because it looked like they were back home in Africa. The Igbo slaves said, “ How could you bring me here, and this reminds me of home but it’s not my home.”

The slaves rebelled against their captors, drowned them and grounded The York in Dunbar Creek. The slaves then, walked into the water as a grand rebellion saying, “the water brought me here, so the water is going to take me back before I be a slave, I’ll be dead and buried in my grave.” The actual sequence of events are unclear, but a white overseer from a nearby plantation by the name of Roswell King wrote the first account of the event and possibly helped recover some of the bodies from the water.

By most accounts, only a small subset of the group actually drowned. Others were captured by bounty hunters and even still, some were never recovered giving hope that the spirit of the Igbo people lives on in our coastal community.

The attendees designated the site as a holy ground and called for the souls to be permanently at rest. The Igbo Landing is now part of the curriculum for coastal Georgia schools.