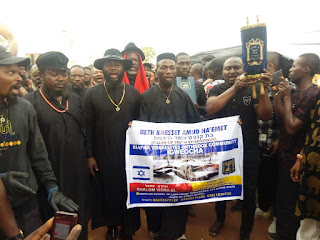 IPOB members from Igweocha, Rivers State at the burial of Nnamdi Kanu's parents. Image via Vanguard.


Satisfied with the successful burial of its leader Mazi Nnamdi Kanu’s parents, In Isiama Afaraukwu Umuahia, Abia State, the Indigenous People of Biafra, IPOB, yesterday said that attendance by people from the 11 States of old Eastern Region, now divided into the South East and South-South, was an indication that they are united in pursuit of freedom.

IPOB in a statement by its Media and Publicity Secretary Emma Powerful said that Mazi Kanu’s parents’ burial has more than before, united the old Eastern Region who were allegedly maliciously divided into South-East and South-South, in order to prevent their coming together to fight one common problem against them which is injustice.

The attendance by traditional rulers, chiefs kings and queens from all the South-East and South-South, is a proof the old Eastern region is still one united people, even though the Federal government divided it into two geopolitical zones to stop them from uniting for a secession a second time.

“We had traditional rulers and chiefs, from Ijaw, iIkwerre Anang, Efik, Ogoni, Ibibio, Idoma, all present and others represented in Afara Ukwu Ibeku Umushia, to pay their last respect to Nnamdi Kanu’s parent”

“Mazi Nnamdi Kanu’s parents’ burial once again has united South-East and South-South in the pursuit of one important goal which is freedom for our people.”

It will be recalled that representatives of very important personalities and members of IPOB from the all the State in South East and South with private and chartered vehicles stormed Isiama Afaraukwu Umyahia, Abia State, for the burial.

According to IPOB, the attendance of the burial by people from different states of the South East and South-South was how the old Eastern Region was doing things together before the government of Nigeria became threatened and divided the region into two.

The group thanked the elders and politicians of Yoruba ethnic group and individuals that attended the burial ceremony, just as it thanked traditional rulers from Igbo land, politicians and businessmen that attended including, former Senate President Adolphus Wabara, Senator Enyinnaya Abaribe, Senator Victor Umeh and Mr Peter Obi, and others too numerous to mention.