My Swedish Career: 'You Need To Win The Hearts Of The Swedish People To Be Able To Succeed' 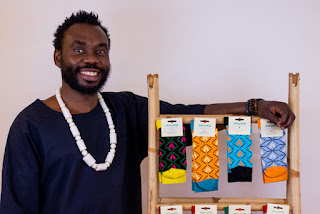 After moving from Nigeria to Sweden, Arinze Prosper Emegoakor struggled with adapting to life in Sweden while staying true to his cultural roots. Now he's starting a business with the aim of telling stories about his African culture and identity - through socks.

Arinze had tried living in Sweden before returning in 2011, but it was only on his second stint in the country that he felt able to settle down.

"When I was 20 years old, I travelled to the Netherlands and met my ex-wife there who is Swedish", he recalls. "I lived in Sweden for a short period, but I couldn't stay. It was too difficult for me to adapt to the environment. But I came back, and since 2011 I have been living here in Malmö."

After joining a kickboxing-gym in the southern city and going out every night to build a social life, Arinze joined the Pan African Movement for Justice. The organization aims for equality for people of African descent in Sweden, and it was here that he found a purpose in his adopted country.

"I got involved in the Pan African Movement for Justice and became a board member of that organization. That provided me with a strong network of people that motivated and educated me. These people are doing something positive in society. That started my journey in Sweden," he says.

After moving, Arinze remembers struggling with his identity and finding a balance between staying connected to his roots and adapting to his new environment.

"Being raised in Africa and having lived most of my life in the western world, there was a constant struggle about what I believed in and who I was", he notes.

"The environment in which I was raised and the Swedish norms are very different in terms of how people express [themselves] and how they see things. I want to be a contributor to this society. I don't want to sit and observe. How do I do that and still keep to my core values? How do I adapt and not attract any unnecessary attention? Being an African man while also being a member of Swedish society was hard at first."

It was all about finding a comfortable balance, something he now thinks he's achieved: "What I did was accept who I am and who I have become. Through my journeys and my stay in Sweden, I've become a hybrid of culture and identity."

"I cannot completely behave or act like I was in Africa because of the culture and norms in Sweden. But I still have my original values. I mixed my values with the norms of Swedish society. That is the balance."

During his childhood in Nigeria, Arinze spent a lot of time with his grandmother, who he credits with introducing him to the power of storytelling.

"I found that the people don't usually say 'do not steal' or 'do not lie', but people tell you stories", he says. "In this story, the thief will get what he deserves. There's a powerful message there. Through storytelling, you take up these values automatically."

His roots in the Nigerian Igbo culture inspired Arinze to start his own sustainable bamboo sock company called Akụko. And he has put the power of storytelling at the core of the company.

Through the colourful collection of socks, he hopes to start conversations and tell the story of his culture.

"Through storytelling, movement and style esthetics, we make people curious to find out more", he says. "The design of my first collection is inspired by a musical instrument called ogene, which is a kind of gong. In my village, it is used to call for meetings. When people want to call for a meeting they tell the town crier, and he will go around to play the ogene to gather people."

Akụko isn't the first business Arinze has started. He learned valuable lessons after starting up an entertainment company for Afrobeat music in 2014.

"We had shows in Malmö and Stockholm. It was fun, but we failed financially", he says. "I started to wonder: why did we fail? I found that the Swedish people aren't easily impressed, especially when you're an outsider. You have to be humble and connect to them. Win the heart of the people, connect with the society and community around your brand. Go for value and the money will come."

Arinze hopes that his work on his second business, and its roots in his native culture, will inspire more people of African descent to follow their goals and dreams. "

If they want to start their own business they should go for it", he says.

"They need to see more people who are like them doing positive things. We can inspire the next generation to do so, be role models. I have documented the blueprint of my journey, and I'm ready to share it with anyone that needs tips about how to crowdfund or how to start up a business. People can always contact me for support on how to realize your their goals in Sweden."