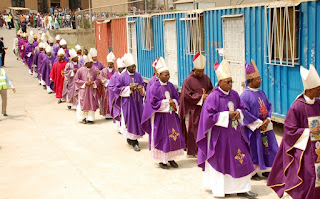 
The cowardly inaction of the Catholic bishops of Nigeria-indeed of 1.3 billion Catholics worldwide and of the 1 billion Protestants to the massacres and Islamization of their Nigerian co-religionists-is a tragedy. For decades now, even before the current nigerian administration, thousands of priests, Pastors, Seminarians, Revered Sisters, and members of the laity have be been slaughtered, beheaded, raped,  kidnapped, and driven from their homes, by Islamic groups like boko haram, isis in west Africa, and the Fulani "herdsmen" terrorists. Islamic terrorists have also destroyed thousands of churches, homes, schools, hospitals, and villages in Nigeria. And what have the bishops done?: Ask members to wear black on Ash Wednesday! What a joke!

This weird reaction is symptomatic of their usual behavior. For example, in the early 2000's, the muslims imposed sharia thus undermining the supposedly "secular" nature of the Nigerian State. And what did the Church do? Bark and no bite. It is most probable that if the Church leaders had reacted more forcefully by warning the Muslim leaders: "if you impose sharia, we will not be part of an Islamic state," the latter could have relented; and Boko Haram and its evil terrorist cousins may not have emerged. But what has been the Church's response? It's one cowardly concession after another-even to the point of accompanying top northern Islamic leaders to Europe and the US in campaigns to promote Islam as a "peaceful religion." Surely, peace is now blooming in Nigeria!

But did Pope John Paul II ask Polish Catholics to wear black in his campaign to defeat Soviet communism? Did the Polish Church not ally herself with the Labor Unions in a joint effort that toppled communism, a totalitarian ideology similar to radical Islam? And why is the papal nuncio (Pope's ambassador) in Abuja silent? Why is the Pope quiet? Why has the Catholic Church failed woefully to use her powerful multinational connections and immense diplomatic clout to save Nigerian Christians? Why are the bishops afraid to alert the church in America and Europe of the Islamic threat in Nigeria? Or are they resigned to suffer the fate of the ancient Churches of North Africa and the Middle East? Why are Nigerian and American Evangelicals the only ones who care about the massacres of Nigerian Christians? Perhaps the Pope and the Archbishop of Canterbury don't care, because Black African Christian lives do not matter as much as those of Christians of the Middle East, where the Church has been more outspoken and protective of her members?

It is well known that Saudi Arabia and Sunni Muslims worldwide protect the interests of fellow members in Nigeria; and Iran does the same for the Shiites. Why have the Vatican and the World Council of Churches abandoned Nigerian Christians to minimization and fulanization?

Or are they waiting for a Cardinal, an Archbishop or a bishop to be beheaded by boko haram before they act more forcefully?

Surely, Rome and Canterbury would have intervened if the Christians were engaged in mass revenge killings of Muslims-as they did in the Central African Republic.
Essay Igbo Diaspora Religion Rev. Fr. Aham Nnorom