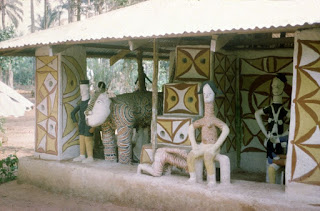 
Recently, Picasso’s granddaughter sold a trove of his unique and highly coveted ceramic works at Sotheby’s, London. Included were Cubist drawings from the 1910s and a selection of unique ceramics that reflect the artist’s fascination with faces and portraiture whose prices range from £6,000 to £60,000. There is also a work titled “Tete a Tete” estimated to be sold between £799,000 and £1.1 million.

In Africa, there were numerous Picassos uncelebrated. They carved or sculptured wonderful art objects, both movable and immovable. Sadly, many of those artworks have either been stolen by Western countries or are rotting away here in remote parts Africa. The Mbari Orieamafor is among those ancient artworks, now begging to be salvaged, restored and preserved.

On February 2, 2020, a crew of BBC Igbo Service stormed Umunakara Imerienwe in Ngor-Okpala Local Government Area of Imo State where they found a crumbling Mbari artwork not less than 100 years old. The outcome of the discovery was a story titled “Igbo Culture: Ihe mere e ji kwusi igba mbari n’obodo anyi” (Why making of Mbari art is no longer going on in our land).

Speaking in the BCC interview, two elders of Umunakara, Mr. Atinetus Ekeh and Felix Ekeh explained why the present generation is no longer following the footsteps of their forefathers and tradition of making Mbari art. The two elders said the making of Mbari artwork was a tradition of the people which they themselves met when they were born, and that there is no one alive today that can tell when it started.

“As we were told,” the elders said, “the artists that make the Mbari used to come together whenever they want to make Mbari. They usually conceal themselves and their artwork-in-progress with reed fences for about two years. They use red muds and clay, moulding different kinds of objects within those two years. After the work was completed, they unveil it to the public to see the artworks they had created.”

Because every aspect of life in traditional African society was intertwined with the African traditional religion, some people associate the Mbari art with the worship of the village deity, Orieamafor, “because it kills evildoers,” said Mr Atinetus.

The two elders observed that it was when Christianity came that the making of Mbari was stopped an began to be used only as an object of art exhibition or spectacle.

Mbari is a visual art form practised by the Igbos of Eastern Nigeria. According to Chinua Achebe, “Mbari was a celebration through art of the world and of a life lived in it. It was performed by the community on command by its presiding deity, usually, the Earth goddess, Ala, who combined two formidable roles in the Igbo pantheon as a fountain of creativity in the world and custodian of the moral order in human society.”

In 1961, Ulli Beier, a German editor, writer and scholar who had a pioneering role in developing literature, drama and poetry in Nigeria, in association with others, co-founded the MbariClub as a cultural centre for writers and artists.

It is ironic that the descendants of the same British colonial masters who were responsible for the rape, looting and destruction of African arts and culture, are now the people championing its restoration and protection against extinction.

This work and the BBC’s, therefore, serve as wakeup calls for state and federal governments, private organisations and international agencies, to rise to the challenge of restoring and preserving these great monuments scattered across Nigeria. They are indeed repositories of our history, arts and culture which provide contents for the much-talked-about tourism as Nigeria’s new oil deposit.