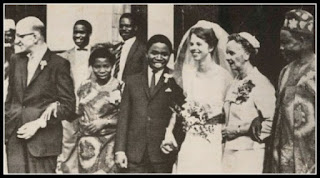 LAGOS, NIGERIA (THE NEW YORK TIMES)—The granddaughter of a prominent American banker was wed to a young Nigerian today.

In marrying ciement C. Onyemelukwe of Lagos, Catherine Danforth Zastrow, a tall blonde former Peace Corps volunteer from Fort Thomas, Ky., has joined the small but growing number of American‐Nigerian couples who have settled down to life in post‐independence Africa.

Many have encountered serious problems. All have told of difficulties in adjustment. But most of the unions have survived.

Clement Onyemelukwe was born 31 years ago in the remote town of Nanka in Nigeria's eastern region. His father, a contractor, was barely literate in English, but saved enough money to help all of his three sons work their way through college.

Mr. Onyemelukwe took degrees in engineering and economics from Leeds University and the University of London. He then joined the Electric Corporation of Nigeria— Nigeria's giant public‐owned power utility —and rose swiftly to become chief engineer of the Transmission and Distribution Division.

“This is a real Horatio Alger story,” said Peter Zastrow, the bride's father, an engineer with the American Telephone and Telegraph Company in Cincinnati.

Mrs. Onyemelukwe, born in Huntington, L. I., attended Highland's High School in Fort Thomas, which is in the Cincinnati area, and was graduated from Mount Holyoke College in 1962 She has spent the last two years with the Peace Corps teaching German at the Federal Emergency Science School in Lagos.

Her maternal grandfather, the late Herman W. Danforth, was appointed the first president of the Federal Land Bank in Woodrow Wilson's Administration in 1917. The bank was formed to grant long‐term farm mortgages

Mr. and Mrs. Onyemelukwe have confided to friends that their decision to marry was a difficult one.

There was an initially adverse reaction from parents on both sides, especially from the Onyemelukwes. They felt their son should marry someone from their home district, or at least a girl of their own Ibo tribe.

But their resistance dissolved after they came to Lagos and met Miss Zastrow shortly before she finished her Peace Corps contract and returned home to announce her engagement.

“When Cathy first broke the news,” Mr. Zastrow said, “I was intellectually for it but emotionally against it.”

This sort of thing has to happen to this generation for better relations between countries,” Mr. Zastrow said. “They are very devout Christians —more Christian than many Americans.”

Catherine Onyemelukwe is the second Peace Corps girl to wed a Nigerian out of a contingent of more than 600 volunteers, almost half of whom are women.

Among the wedding guests were Mr. and Mrs. William Saltonstall, former headmaster of Exeter Academy and now head of the Peace Corps in Nigeria.

Others in attendance included English, American, and