Chinua Achebe And The World's Disintegration 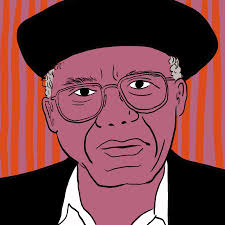 The title of Chinua Achebe's novel "Everything Disrupts" became an overly apt description of reality. Dan Jönsson reflects on the Nigerian author's literature and significance.

There is no society. There is no god. There are no genders, no classes of society, no races and nations, there are no differences at all between people - we are all born equal and everything human is fiction, that is, a kind of superstition, and because it is, it must also be our duty to put us over them. Ever since the seventeenth century, the historical task of modern man has been to step out of his self-inflicted authority, as Kant wrote, and it is probably said that our time has driven that task to its forefront. There is not even a modernity. And yet, it turns out time and again that among the worst that can happen to a human community is that it is deprived of its fictions. Without them, there is not even humanity in the end. Society, religion, ideology - all of them, of course they are.

Ended in Chinua Achebe's novel"Arrow of God", "God's arrow", is relentless as a Greek tragedy. Ezeulu, the old high priest of Umuaro village society in eastern Nigeria, has lost his mind and has been abandoned by his god. We find ourselves somewhere in the 1920s; the white man's and the Christian religion's first perplexing intrusion into the traditional Igbo society lies a few decades back and Ezeulu has since defended the god of his fathers, Ulu, against the divinities of the white god, partly against lesser gods and their priests as in the conflict with white civilization sees its chance to stand up and then split. Ezeulu sees himself as Ulu's humble tool, "the arrow in the bow of God," and his patient proposition seems to have finally won: after a successful shadow wrestling with the representatives of the colonial power, the domestic enemies have also been silenced. But Ulu is not satisfied: in one last act of foolish arrogance, his priest forces the villagers to postpone the vital harvest of yams, which has catastrophic consequences and ends with a majority of the people turning to the God of Christians instead. The arrow of God turns out to hit, not Ulu's enemies, but his servant and thus Ulu himself.

An important detail of Achebe's storyis that Ulu is a constructed deity: several times it is told how the elders of Umuaro's various villages once long ago, after a long period of war and disintegration, joined forces to create a common god, which could hold them together. Ulu is thus recognized by everyone in society as a fictitious force - but for that matter no less real, and even necessary to keep the community together. When this power disappears, everything falls. The world, as you know it, goes down. "God of Arrow" is the last, and arguably best, of the three novels Chinua Achebe wrote over the years about Nigeria's independence in 1960, a loosely coherent trilogy that began with the classic "Things Fall Apart" - in Swedish "Everything breaks apart" - and that really revolves around this single theme: the downfall of the old world.

"Everything is Breaking Down" has taken its English title, "Things Fall Apart", from a famous poem by William Butler Yeats. "In particular, things fall, the midpoint fails, the world has been given the wild in violence," says Erik Blomberg's translation of this sorrow song over the old order that went down during the First World War; words that have been quoted time and time again in recent years when the world as we know it again seems to burst and transform. Perhaps these cracks and transformations are what human history is basically about; it is one of the eternal subjects of literature in any case. "Everything breaks down" is by far the most important and most read modern African novel by far, and a milestone in postcolonial literature at all. With its seemingly simple,

"Everything breaks down" takes place right at the beginning of the process depicted in "God's arrow", just before the turn of the century, in the fictional village community of Umuofia where the clan leader Okonkwo for a fight very similar to the priest Ezeulus - against a colonial power he believes be able to master but in fact do not understand at all. Okonkwo's story is equally tragically fatal; his own son betrays the faith of his fathers and joins the Christian missionaries. In the dramatic, but ambiguous finale, Okonkwo takes his own life, where the perspective shifts to one of the colonial powers' emissaries, who with some cynical scattered reflections, can figure out how the death struggle of traditional culture is hardly more than a little picturesque but insignificant grin in the vast colonial power machinery.

"Everything breaks down" is thus very consciously written with a cultural double look. Chinua Achebe grew up in a privileged Igbo family, his parents had belonged to those who early converted to Christianity, and as a pupil of some of colonial Nigeria's most prestigious schools, he became thoroughly acquainted with Western culture and literature. He himself described in many contexts the ambivalence that emerged from this upbringing, a sense of simultaneous admiration and resistance, especially against the tradition of colonial African depictions that had its emblematic expression in Joseph Conrad's classic "Heart of Darkness". "Everything breaks down" can be read as a tight and traditionally aware counter-script, where the wrath is most marked as a restrained, sad insight about one's own powerlessness. The white man "has put a knife in what held us together,"

It is probably this delicate balancewhich explains the enormous significance of the novel. Because even though "Everything breaks down" today is considered groundbreaking, it was hardly the first modern Nigerian novel. Literary scientist Terry Ochiaga has described in a study how Achebe was, in fact, one of a group of Nigerian writers who emerged at the same time, and from the same circle, and how the impact of "Everything breaks down" first appeared in a little bit, in time with the country's independence process and the publication of the following parts of the African trilogy. In the second, "No Longer at Ease" - "No longer at home" in Swedish - which came out the same year as Independence, 1960, Okonkwo's tragedy is repeated as a dark father when his grandson Obi, who at the expense of the village received a fine education in London, returns to be confronted with the corrupt reality of the soon-to-be-independent homeland, and is forced to realize what remains to be believed when all the old truths are taken apart, one by one. Namely - of course - the money.

And soon not even that. Chinua Achebe's literary production is essentially a short decade; then the Biafra war broke out, and from that disaster he never really recovered. "Everything breaks down": the title of Achebe's breakthrough novel turned out to be a prophecy. And when there is no humanity - how can you write?