IKEDI OHAKIM: Nigerian Leaders Including Myself Have Failed In Terms Of Security 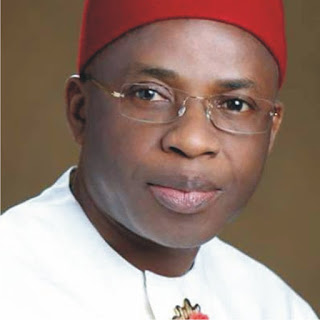 
A former Governor of Imo State, Ikedi Ohakim has blamed the current security situation in the country on the nation’s political leaders who have remained unmoved and indifferent in tackling the security challenges confronting the country.

Ohakim stated this today while delivering a lecture He said that insecurity has hitherto become the national anthem on the lips of every Nigerian, a situation, he noted will continue to portray the country in a bad light before the international community.

“Our lands have suddenly become graveyards as a result of incessant killings which have become the order of the day.”

“The late Nobel Laureate, Chinua Achebe was right when he put up his first artwork, ‘Things fall apart’ and ended it with, ‘There was a country’. Indeed, things have fallen apart in Nigeria.”

“I charge Mr. President, as a matter of urgency, release the presidential Marshall plan for security because we shall not continue to fold our arms and watch our people die like fowls everyday.”

“Just last week, bandits killed another 52 in Kaduna state. These are not 52 cows but human beings. What a country! Meanwhile, the Governor of Kaduna state has apologized for his inability to protect his people. It is indeed a sorry situation.”

Ohakim who spoke as a guest at the event further said that Nigeria will hardly make a headway while leaving with the enemy called ‘insecurity and corruption’, urging the leaders to apply human face in the fight against the menace.
Adindu Obialor Ikedi Ohakim Newsroom Nigeria