In Honor Of The Great Vincent Chukwuemeka Ike 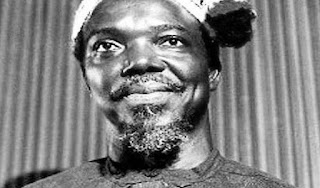 I mourned within me late last year when I read of the death of Dr Ore Falomo, late Chief M.K.O Abiola’s personal physician. That was because I had a secret to share with him I would never again be able to. But concerning this demise now, I will not keep this secret so that, possibly, a grieving widow’s multiplied pains would be eased. In a most unsavoury way, I have stumbled on news that has led me to conclude that Professor Chukwuemeka Ike died from a grieving heart; one that was not only broken, but shattered by sorrows and pains of tragedies, in addition to family issues gone terribly wrong.

This is how it all went for me – upon hearing of the demise of one of Africa’s greatest novelists, Chukwuemeka Ike, as many people heard too, I ‘clicked online’ to sympathise with my lifelong “Big Brother” , Prince Osita Ike, the only son of Chukwuemeka Ike. As I was browsing, I was making mental plans to support Prince Osita and travel to Anambra, their homestead for his famous father’s burial, once he let me know the date.

The page on my phone opened and I was hit by what seemed like thunderbolt that struck me right in the forehead – Prince Osita Ike Dead! What? When? How? I was filled with grief, and was confused. I scrolled further down only to find out that he had even passed on since December 2016!

Where in the world have I been then? In the midst of my sorrow, my mind flew to his precious parents. Oh no, the trauma of losing your one son, I thought. And just three years later, Prince Osita’s mother now becoming a widow! It was simply tragic. However, I got thinking and, knowing that Chukwuemeka Ike was also an Igbo monarch, his burial would not be done in a hurry. My resolve to attend, whenever announced became even stronger, in honour of the memory of Prince Osita.

A few days back, I went browsing again in search of news of the great wordsmith’s transition arrangements. Firstly, I reckoned I should check for the Anambra airport, and flights going there. Big shock there – there is NO AIRPORT at all in Anambra – an old, old state, a state of renown; a bastion of national productivity! I was astounded. The nearest airport is Asaba Airport in Delta, state-built; even though that’s a federal preserve. Worse, it’s 32km away from Anambra, on federal roads that are notoriously dangerously dilapidated! Pressing on with my main task nevertheless, I got to discover a much sadder state of affairs with the Ikes, much worse than I ever imagined. In fact, reading through people’s responses on social media to the whole scenario, l saw one saying that it all sounded “more like a movie script”- Tookool (Nairaland.com). One pointedly asked why the Prince’s estranged wife would kill a son and also kill the father! I was reading from bottom up, so MORE questions came to my mind- estranged wife? Who is killing who, and killing who else?

But before all the mystery:


His Majesty, Eze Professor Vincent Chukwuemeka Ike OFR, Eze Ikelionwu XI, Ugwu Aro- foremost Nigerian novelist passed away in Nnewi, Anambra State on the 19th of January 2020 at 88. Chukwuemeka Ike was a distinguished scholar, renowned author, former Registrar of WAEC, university don as well as administrator; and visiting professor at the University of Jos. He was also the traditional ruler of Ikelionwu Kingdom of Anambra. Chukwuemeka Ike was a prolific novelist and author of: Sunset at Dawn, The Potter’s Wheel, Toads for Supper, The Naked Gods, Expo 77, and Our Children Are Coming, among several others.. He was married to Bimpe; Ugoeze Professor Adebimpe Ike, librarian emeritus. They met as students in the then University College, Ibadan. Chukwuemeka Ike later lectured at his alma mater. He was the first Nigerian to hold the post of Registrar of the West African Examinations Council (WAEC). He was also the first indigenous Registrar of UNN. He co-ordinated the Nigerian Book Foundation for many years. His wife, a library scientist, has a doctorate degree. His grandson, Chukwuemeka Junior, is named after him.

Prof Ike was just three months to his 89th birthday when he passed on in January 2020. Reports say his health went downhill after the sudden death of his son, Prince Osita in 2016. It gets even more tragic. The Ike family had for over a decade been denied access to their only grandson! Chukwuemeka Ike died of the heartbreak of it all!

What really happened was that Prince Osita had gotten married to Princess Osaru, the daughter of Professor Emmanuel Emovon , and they had a son as earlier said. Prof Emmanuel Emovon – CON, FAS – is the Ogbayagbona of Benin Kingdom. I also know that his wife is the daughter of an Edo king, as well as being an academic herself. But Prince Osita’s marriage ended in bitter separation and he was in the process of getting a proper divorce before he died suddenly in 2016 of an asthma attack. When they separated, his wife took their son away to an unknown destination; this happened when the boy was 11 years old ( he is now 21). I never knew any of this till three days back when I made another attempt at getting any burial information, online and then through phone calls.