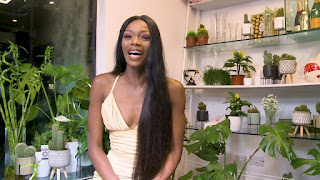 JOHANNESBURG (THIS DAY LIVE)--The 2019 MBGN Queen and reigning Miss World Africa, Nyekachi Douglas, was the star at the Forbes Africa Leading Women Summit in Johannesburg, as part of the International Women's Day.

Winning a crown at a beauty pageant has and will remain the dream of many young ladies who have grown up with dreams and aspirations of becoming a queen. For Nyekachi Douglas, the 21 year old Nigerian Miss World Africa, hers was not totally a different ball game growing up. She saw as her idol the first black Miss World from Nigeria, Agbani Darego, and many beautiful queens. Nyekachi is proud of how far she has come.

The beauty queen defeated 36 other contestants to emerge winner of the Most Beautiful Girl in Nigeria beauty pageant. The 2019 MBGN represented Nigeria at the Miss World pageant last December in London where she placed top five and was crowned Miss Word Africa and Miss World Top Model. She trended worldwide for her joyful reaction to Miss Jamaica, Toni-Ann Singh's win.

Nyekachi Douglas was a guest at the recently concluded Forbes Woman Africa Leading Women Summit in South Africa, and she shone in the spotlight, talking about her journey from a dreamy little girl to becoming Miss World Africa. The Rivers State native from Port Harcout exuded grace and glamor in a lovely dress as she sat with CNBC Africa's Fifi Peters for a one-on-one interview to talk about her her role and vision as Miss World Africa.

Giggling in between the chat, gesticulating at some points, the Public Health major at the University of South Florida also spoke glowingly about her primary project in Makoko slum, the largest floating slum in the world and how she is planning to extend it to other communities in Africa.

On her reaction to Jamaica's Toni-Ann Singh's win, she said: "I think it was just excitement. You know I'm a very expressive person. At that point, I was really just expressing what I was feeling inside. And I don't know if you watched all the other queens there, you would see that they were all very excited and I feel like I was acting out what everyone else was feeling inside their heart because I'm just that expressive."

On growing up, Nyekachi said: "I grew up in a home. I am from Port Harcourt it's in Rivers State in Nigeria. It's my home. And I would say that I grew up as child in a place where I saw a lot of people beg and I wanted to... the first Miss World from Nigeria, Agbani Darego. She was crowned when I was three years old and she lived down the street from me and she went to the same primary school as me. So I grew up always seeing her and thinking 'my God this is the way that I want to impact, this is the way that I want to be seen'.

"And honestly envisioning myself as a queen. I would wear my mummy's clothes and shoes and walk around the house and paint lipstick on my face all the times. And I say 'yeah I'm Agbani (giggling) and little did I know that I would actually be there. And I think I grew up in a place where I saw many beautiful queens and I saw many beautiful people but I had little. I grew up in a place where my community, we weren't exactly the most what I would say 'fancy'. I went to school wearing my sister's uniform that she has passed on because that's what my mum wanted that's what they could afford at that time."

On her job as Miss World Africa, the MBGN 2019 queen said: "Oh my job is to sit down and look pretty (jokes). I think that for me, Miss World Africa is really for me to be able to reach out to the communities. First of all, to start with from where I'm working with I am trying to improve the communities known as the largest floating slum in the world and it's in Nigeria; it is called Makoko in Lagos. They really have very poor waste management system there and that's something that I'm really trying to work on infection prevention and control.

"So, my job pretty much is to meet these people, improve the way they live, get funding. We just finished building a school there and now we are going to start teaching these kids not just to learn biology. In Nigeria, most people focus on the book, book, book; you have to be very, very book smart, you have to be an engineer, a lawyer. And I want them to explore this part and also to explore their creative sides like the fashion designers, the hairdressers, the makeup artists, the artistes and all of these things. So that's what I want.

"I really want to teach these kids about their personal hygiene in a way that they would learn it and teach it. Just a generational thing and they would just keep going and keep growing. So I would say my job is to teach and to learn at the same time.

"I'm hoping that with what I'm doing obviously with personal hygiene in Makoko is tied to my education. I am a Public Health major at the University of South Florida right now. And I'm hoping that when I am done with my education, I will be able to go into infection prevention and control. I really want people in the community that I'm working with and in general around the world to be more aware of personal hygiene. Things like coronavirus now really would have been curbed if we do stay safe and practicing persona hygiene like we are washing our hands daily with hand sanitizers and a lot of these.

"And really what I dream for (when I'm probably on the Forbes list) is to be making impact where people are practicing better personal hygiene from a young age so that they have grown into it and its now part of them to be a way they believe."