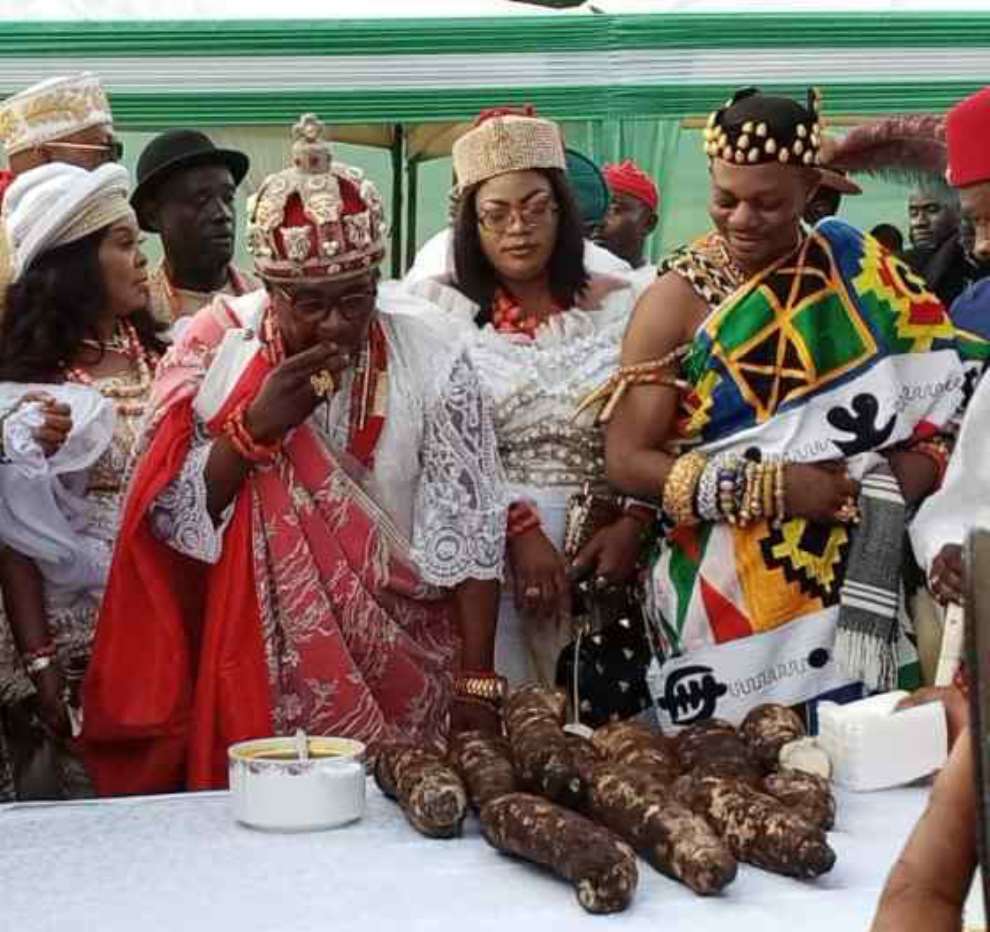 BY MARTIN-LUTHER C KING
MODERN GHANA
It was a rare but fine blend of rich Igbo, Ghanaian and Nigerian cultures on display in Adoteiman, near Accra as His Royal Highness Igwe Chuma Raymond Okadigbo marked his seven years on the throne as the Eze Ndigbo in Adoteiman kingdom on October 30.

Depicting a carnival-like atmosphere, the event started with the revered traditional ruler arriving at the event venue in a royal procession, accompanied by his gorgeously dressed wives, members of his family, his Onowu, or traditional prime minister, and other members of his cabinet, with a lavish display of fireworks to electrify the venue.

In his welcome address, Igwe Okadigbo thanked God for keeping him alive and in good health to mark his seven years on the throne as the Eze Ndigbo in Adoteiman kingdom in Ghana; and, to celebrate the new yam festival this year.

Explaining that the new yam festival was an old tradition in Igbo land, when the people gather to thank God for a bountiful yam harvest for the year and to formally announce that all are free to consume yam again, Okadigbo used the occasion to commend his beautiful wives, his Onowu, members of his cabinet and all who contributed in one way or the other towards making the event a success, assuring his guests that everything has been put in place to guarantee their safety, security and welfare during and afterwards the event.

In his goodwill message, Eze Chukwudi Jude Ihenetu, the Eze Ndi Igbo in Ghana, appreciated the hospitality and accommodative disposition of Ghanaians which, he said, made it possible for Ndi Igbo (Igbo people) to reside and thrive in Ghana without fear of attack, molestation or humiliation. He cautioned Igbos resident in Ghana to remain law abiding by ensuring that they obey all the laws of the land.

Commending Igwe Okadigbo and members of his cabinet for putting up such an event that promotes the rich cultural and traditional heritage of Ndi Igbo, Eze Ihenetu wished him many more happy returns on his throne.

each, separately, gave glowing testimonies of their respective interactions with Igwe Okadigbo; and, appreciated the rare and uncommon entrepreneurial ingenuity of the Igbo people, citing the several traits they share in common with the Igbo race.

They commended Okadigbo for his leadership style which, they said, has promoted the cordial relationship between the Igbos in Ghana and their host communities.

Waxing historical, the chief of Dodowa, Okukrubuor Nene Tei Kwesi Agyemang V, also used the occasion to reveal publicly for the first time a historical connection between his Dodowa people of Ghana and the Igbo people of southeast Nigeria.

He said when his people journeyed from their original home in Israel nine hundred years ago in search of a new home, the first place they settled was the Nnewi area of Igbo land, where, he said, they were well-received by the original Igbo inhabitants.

According to him, his people later continued their journey from Igboland to Togo, and then, finally, to their present abode in Dodowa.

"So, anywhere you see an Nnewi man, tell him I am his brother," Okukrubuor Nene Tei Kwesi Agyemang V stated.

Proceedings at the event went a notch higher in excitement when the chief of the Dagombas, Mohammed Suntaba, arrived.

Surrounded by his entourage and retinue of drummers and musicians, he took a while moving around the event venue greeting other royalties present; all the while displaying some fascinating dance-steps.

The high points of the event were the eating of the new yam, and the subsequent conferment of chieftaincy titles by Igwe Okadigbo on some deserving Igbo sons and daughters, as well as Ghanaian friends of Igbos, who have distinguished themselves in their various fields of endeavor.

Guests were later treated to various cultural dance and masquerade displays by a rich mix of Nigerian and Ghanaian groups, including from Ga-land, Eweland, the Dagomba; as well as from Yorubaland (Nigeria) and the hosts, Igboland (Nigeria).

Representatives of Anambra State community in Kasao, Onitsha Ado, Inner city palace, Dome Kwabenya, as well as delegates from other Igbo-speaking states in Nigeria and Ghanaians from Greater Accra, Volta, Savanah, Northern, and other regions were among the dignitaries that graced the occasion.