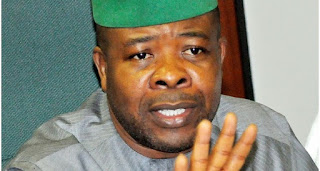 OWERRI (DAILY POST) -- Imo State Governor-elect, Hon. Emeka Ihedioha, has disagreed with Governor Rochas Okorocha that a 52-man Joint Transition Committee drawn from his side and that of the government has been constituted.

According to a statement by Chibuike Onyeukwu, media aide to the Ihedioha, the press release issued by Governor Okorocha’s Chief Press Secretary, Sam Onwuemedo, that a Joint Committee was inaugurated for the handover was false and misleading.

Onwuemeodo had claimed the inauguration took place at Government House in Owerri. He quoted the Secretary to the State Government, Mark Uchendu, who represented the governor, as urging the joint committee to work harmoniously in the best interest of the state.

Rebutting the statement by Okorocha’s spokesman, Ihedioha said: “We consider as needless, the deliberate misrepresentation of facts, aimed at provoking unnecessary altercation between both committees at a time the smooth transition should be our utmost priority

“We wish to state clearly that what took place at the Government House on May 3, 2019 was only a meeting of the 31 member committee, headed by Mr. Ernest Ebi, drawn from the Committees earlier inaugurated by His Excellency, Rt Hon. Emeka Ihedioha CON, Governor elect, Imo State and the 21 member transition Committee of His Excellency, Governor Rochas Okorochas of Imo State.”

He pointed out that there was no fresh Inauguration of “52 member joint transition Committee” by the Governor or his representative as claimed in the said release.

“The team to the Government House led by Barr. Chris Okewulonu, had been previously inaugurated by the Governor elect, while Governor Okorocha had also inaugurated his team the previous day, all in a bid to ensure a hitch free transition

“It was therefore inappropriate for the said press statement to convey the erroneous impression that there was a fresh Inauguration when the two teams interfaced.

“It is important that correct information on the activities of the two committees is, at all times, fed the public to ensure a seamless and smooth transition by May 29, 2019,” the statement concluded.
Daily Post Emeka Ihedioha Imo State Nd'Igbo Owerri