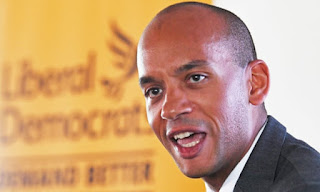 Former Change UK and Labour MP Chuka Umunna at a press conference in Westminster, London, to announce he is joining the Liberal Democrats. Photograph: Stefan Rousseau/PA

Chuka Umunna is to vacate his existing south London seat to fight the Cities of London and Westminster constituency for the Liberal Democrats, as the party risks angering local activists by shuffling candidates to accommodate high-profile arrivals.

The announcement of Umunna’s move from Streatham comes as party sources said another ex-Labour MP, Luciana Berger, could be parachuted into a north London seat, Finchley and Golders Green.

The proposed move for Berger, who currently represents Liverpool Wavertree, has upset some local Lib Dems, with the existing candidate saying on Friday she still expected to fight it.

One Lib Dem activist said: “People are fed up with celebrity MP entryism. Hardworking candidates are being yanked out of their seats or pressured not to stand.”

The Lib Dems have gained five new MPs in recent weeks, one via a byelection but the rest refugees from Labour – Umunna and Berger – and the Conservatives, in Sarah Wollaston and Phillip Lee.

Umunna, who quit Labour in February and joined the Lib Dems three months later, will move from his current Streatham seat to take on Mark Field, the former Foreign Office minister who escaped punishment after being filmed grabbing a climate protester by the neck.

In the 2017 election Field secured a 3,000-plus majority over Labour, with the Lib Dems a distant third. But the party believes a better indicator is May’s European elections, where in both parts of the constituency the Lib Dems won more votes than the Conservatives and Labour combined.

The constituency, which includes parliament, the West End and the financial centre of the City, was heavily pro-remain in the 2016 referendum. He told the Guardian: “It’s absolutely clear that if you want to stop Brexit with no fudge or ambiguity, residents in this area are already picking the Liberal Democrats.”

Umunna is officially moving because the Lib Dems already have a well-established candidate in Streatham. It has, however, been a safe Labour seat for over 20 years, with the party winning almost 70% of the vote in 2017, making it hugely difficult for Umunna to win as a Lib Dem.

The mooted move to shift Berger to Finchley and Golders Green remains to be confirmed. While narrowly held by the Conservatives over Labour, it is a strongly Jewish area and there are indications some Jewish voters could abandon Labour over its handling of antisemitism in the party.

Berger, who was announced as a Lib Dem on Thursday, quit Labour in February over the issue.

A party spokeswoman said: “Luciana Berger only joined a day ago, and no decisions will have been made, so this is all speculation.”