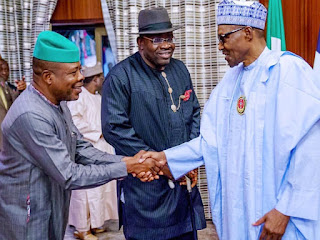 ABUJA (THIS DAY LIVE) -- South-east governors and Igbo leaders yesterday in Abuja urged President Muhammadu Buhari to declare a state of emergency on decayed infrastructure in the region.

This is coming as the president has approved N10 billion for the take-off of the expansion and rehabilitation work in Akanu Ibiam International Airport in Enugu.

Rising from a closed-door meeting with Buhari in the State House, the governors, accompanied by Igbo leaders, said there is a disconnect between the region and infrastructure, citing the deplorable state of roads in the zone as an illustration.

Briefing journalists at the end of the meeting, Chairman of the South-east Governors’ Forum and governor of Ebonyi State, Chief David Umahi, said the delegation drew the attention of the president to the deplorable state of South-east roads as well as the plights of the people of the region, which he said had been worsened by the closure of Enugu Airport.

Umahi said the situation needed immediate intervention in view of the industrious nature of the people of the South-east whom he said had to move from one place to the other as traders and businessmen.

However, the governor added that the president noted the complaints of the delegation and promised to act on them.
He also said the Minister of Aviation, Senator Hadi Sirika, told the meeting that the hitherto impediment against the take-off of the expansion work in Enugu Airport had been addressed and hence, the project would take off without any further delay.

According to Umahi, the necessity to start and complete the Enugu Airport project had become compelling because “what Kaduna is to the North is what Enugu is to the South-east,” adding that the rail projects in the region would also soon take-off.

“The good take-aways from the meeting is that we are happy because Enugu Airport will be alive again. We are happy with the hardworking Aviation Minister,” Umahi said.

Following the complaints of the Igbo leaders, the president approved N10 billion for the take-off of the expansion and rehabilitation work in Akanu Ibiam International Airport with a remark that he had the assurance from Sirika that the project would be expeditiously executed. The president, who announced the approval on his Twitter handle, @MBuhari, said:

“I have approved the sum of N10 billion for an intervention fund for the upgrade of the Akanu Ibiam International Airport, Enugu. I have the assurance of the Minister of Aviation that the work will be done speedily and to the highest standards.

“Even as we have many items competing for our limited resources, we will continue to prioritise infrastructure investments in every part of the country. It is our responsibility to ensure Nigeria’s infrastructure is fixed; we will keep doing this.”

Umahi also said the attention of the president was drawn to the state of Sam Mbakwe Airport in Owerri, stating that there is a need to expand the runway of the airport and simultaneously carry out an extensive work on the tarmac.

Also yesterday, the South-south governors and leaders of nine states that conglomerate the Niger Delta met with the president in the State House.

Dickson who failed to disclose categorically the purpose of the meeting, stated that they were in the State House to hold talks with the president on issues of concern in the Niger Delta.

The governor who said the meeting was propelled by recent events in the Niger Delta Development Commission (NDDC), added that they briefed the president on challenges and issues brewing in NDDC, and the president promised to look into situation.

Asked to state specifically the challenges in NDDC as well as the issues of concern in Niger Delta region, Dickson still evaded the question, saying the visit had to do with the stability and development of the Niger Delta. He also said the president was in full grasp of the situation.

“Our concern has to do with the stability and development of the Niger Delta. We had a robust discussion with Mr. President who fully understands the challenges that come with development, and he promised to look into the challenges which he’s aware of and we all agreed to work together,” he said.