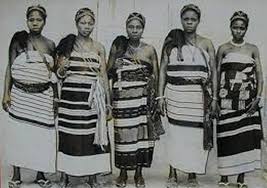 
For many Nigerians, marriage is a union between two people — a man and a woman.
While this might apply in certain areas, some states practice same-sex (non-sexual) marriages between women.
We explore the history behind this practice and where it is still done today.

Nigeria is a multiethnic country with over 500 different languages and various unique traditions. One formerly popular tradition is that of women marrying women.

According to Nwando Achebe, a Nigerian-American academic, feminist scholar, and multi-award-winning historian, this is not to be confused with same-sex unions. “Woman-to-woman marriage in Africa has absolutely nothing to do with homosexuality,” she states.

She is supported by another researcher, Kenneth Chukwuemeka, who labels woman-to-woman marriage as “an improvisation to sustain patriarchy,” adding that it is “simply an instrument for the preservation and extension of patriarchy and its traditions.”

Pre-colonization, evidence shows that the Igbo people of southeastern Nigeria practised this tradition so that one of the women (now deemed the husband) could hold on to her assets or an inheritance.

This is because wealthy, influential women enjoyed equal privilege with their male counterparts. So these women of high status were allowed to marry ‘wives’ by paying their bride-price.

These children carried the female husband’s name, not that of the man responsible for the pregnancy and were considered legitimate in society’s eyes.

This tradition was also practised by women past menopause. These group of women could marry wives for themselves, for their husbands, for their sons, and/or for their siblings.

For instance, a widow could be permitted to marry a female relative if she wanted to remain with her in-laws. This can only be when there are no men in the family.

In other pre-colonial societies, widows and women who could not have children were allowed to take widows wives and claim the children their wives had as their own.
In modern-day Nigeria

While some traditions come and come, others stand the test of time. Woman-to-woman marriage falls under the latter category. This is still practised today in Mbaise, Imo and Okrika, River states in Southern Nigeria.

Explaining why it is still done, an Okrika native, Miebaka Fiberesima said, "We have a reason for it. It's done to continue a family name. If the wife does not have male children, she can also marry a wife with the hope of having male children to carry on her husband's family name. She can also do that if her family has no male child and the children from the marriage will carry her family's name."