Fire Service: Neglected At The Peril Of Citizens 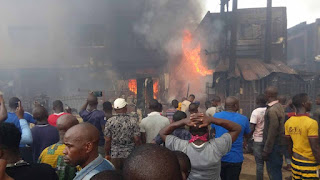 Image via The Guardian

…Despite increasing incidents of fire disasters, Fire Service departments across the country are in shambles

At the maiden meeting of the present Federal Executive Council (FEC), President Muhammadu Buhari explained why he created the Ministry of Humanitarian Affairs and Disaster Management. His reasons were not far-fetched. The country was contending with a lot of humanitarian issues, which were occasioned by unforeseen situations like the Boko Haram insurgency that has displaced thousands of people in the Northeast region of the country, flood disasters and fire outbreaks, among others. People affected by these unfortunate incidents no doubt needs support from wherever it can come from, especially the government. Although the National Emergency Management Agency (NEMA) has been on ground to tackle such cases, the President felt that creating the new Ministry was necessary “to fully institutionalize our various interventions that support some of the poorest and most distressed citizens of our country.”

As is the practice in our political system, it will not be surprising to see the states follow suit with time just like they did with the creation of State Emergency Management Agency (SEMA), their own replica of NEPA.

But at the bottom of Nigeria’s humanitarian crisis is the ill preparedness of the agencies mandated to either nip foretold disasters in the bud or mitigate the effects of unforeseen disasters on the victims. Thus, a million humanitarian affairs ministries across the country without the enablement to function effectively will absolutely not yield the desired result.

For instance, the recent fire outbreak in Onitsha, Anambra State claimed five lives and razed over 500 lock-up shops on Iweka Street Market. Although, the state has a Fire Service Department attached to the Ministry of Power and Water Resources, they were just not prepared to intervene. But for firemen from the Delta State Fire Service that were drafted to put out the fire, more casualties could have been recorded.

The Federal Fire Service would later explain that a mob prevented its men from accessing the scene of the incident. “The Federal Fire Service received a call about the fire outbreak around 2.00p.m. The control room at the headquarters in Abuja immediately turned to its nearest station at Asaba, Delta State, to attend to the fire. Our men immediately headed to the scene, but it was not possible to contend with the heavy traffic at the Niger head bridge, coupled with the behavior of an angry mob who pelted stones at them.

“Thus, it was not possible for the firefighters to get to the scene of fight in such a hostile environment,” Ugo Huan, spokesman of the agency, said in a statement.

There must always be excuses for failure. But where was the Anambra State Fire Service? They didn’t come into the picture and no explanation has been offered. Were they so much ill-equipped that they couldn’t even stage an attempt to save the situation despite having three fire stations located in strategic places in Onitsha?

Fire outbreaks are precipitous and therefore require strategic reactions from the Fire service, the agency trained and equipped to respond to such situations. But as seen in the Onitsha incident, this is not always the case. Hence, The Guardian examined the state of the Fire Service in the country, especially at the state level. The findings showed that while some state governments have come to the realisation that the Fire Service is an important agency of government and have steadily upgraded their capacities, many remain hapless fire fighters as inferno continues to wreck havoc in cities across Nigeria. Reports below capture the sordid state of these inept agencies.