INTERVIEW: I Never Knew I'd Be Alive To Celebrate 60 Years On Stage 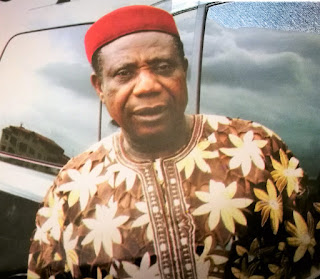 
King of Ekpili music, Emeka Morocco Maduka, is in celebratory mood. On March 6, 2020, a historic event to mark his 60 years on stage will kick off in Awka and climax the following day with a concert in Onitsha, Anambra State.

Organized by Morocco Maduka Global Fans Club, under the leadership of Godwin Isebor, a London-based promoter, the event is themed: ‘60 Years of Chief Morocco Maduka on Stage’.

In this chat, Morocco narrates the untold story of his life as well as opens up on his forthcoming 60th anniversary. Enjoy it.

What message do you have for your fans this New Year?

I pray God to give my fans good health this year and that they fulfill their plans in Jesus name.

Do you have any plan to go on retirement soon?

I will retire when I clock 80. I am now 76 years old, so when I clock 80, I will celebrate my birthday and then retire. That’s one of the plans I have.

Are you working to release an album this year?
Yes, for weeks now, we have been working in the studios, recording some songs, and when the works are completed, the album will be released. But we have not chosen titles for the songs neither have we fixed date for the album release.

Another programme that we have is that on March 6 and 7, 2020, my friends all over the world, under the umbrella of Chief (Dr.) Morocco Maduka Global Fans Club, with head office in London, UK and under the leadership of Chief Godwin Isebor, will be holding a two-day event here in Nigeria to celebrate my 60 years on stage.

What’s the theme of the event and are you the one sponsoring it?

The theme is “60 Years of Chief Morocco Maduka on Stage,” and I am not the one sponsoring it. What I did was that, when they approached me, I agreed to their ideas and gave them my blessing. For now, they are seeking sponsors, and from what I learnt, many companies and individuals have indicated interest to be part of the event, the same thing with many notable musicians in Nigeria.

Where will the event take place?

The event will take place on March 6. There will be a public lecture in Awka, the Anambra State capital. Then on March 7, all roads will lead to Onitsha for the historic musical concert. In fact, many great musicians have promised to support me on the event.

By March this year, you will be marking your 60 years on stage. It’s like you started playing music so early in life?

Yes, I started playing music at the age of 12. I mean serious music, and since that time, I have not relented. I thank God who made it to be like that. I am 76-years- old now. What a blessing from God! Remember that our highlife music king, Chief Stephen Osita Osadebe died at the age of 72; Chief Oliver De Coque died at 60 something so, I thank God for the grace he has given me, keeping me alive and strong till now. In fact, it’s a miracle because I never knew I would still be alive today.

Tell us the most challenging moment in your life?
One of the most challenging moments in my life was in 1960 when I made up my mind to go into full-time music. I mean taking music as a career. My father discovered what I was about to do and he was against it. In fact, he came up with all manner of fight to thwart my plans to become a musician. I think he even went spiritual to stop me, but all was in vain. So, one day, he pounced on me and gave me the beating of my life. He nearly killed me that day, but with people’s intervention, I was saved. That’s how I ran away from home.

I cannot blame my dad because in those days, musicians were nothing to write home about, hooliganism was their way of life. I mean majority of them spent their life with harlots. But I swore that my life would not be like that if I eventually became a musician. I promised my father the same thing when he later granted me permission to become a musician. Today, my secret pain is that my father didn’t live long to see how successful I have become as a musician. He never lived long to see my music career booming and see me making good money from it. When he was alive, I was singing but was not making money. In fact, I was very poor then. I was so poor that I couldn’t afford to drink beer but local gin. But still I never allowed my state of poverty to discourage me from performing with my band.

But you promised your father never to go the way of other musicians, so what happened?
At a point, people were going to my father to ask how come that he allowed me to go into music after he had spent so much money to educate me. They said: “he’s not even making money from music, he’s a poor musician for that matter.” That time, I was nearly a drunk.

Was that before the civil war?

Yes, that was before the war broke out. But when God remembered me and said my time has come, I made up my mind to stop drinking local gin, and I took to beer and wine. But now, I don’t drink those stuff again, even soft drinks I no longer take. Now I drink only water before going on stage (laughs). But in those days, I must drink and drink to get high before going on stage. Today, I can perform for hours without taking alcohol.

What’s the title of your first album?

It was titled Aya Nigeria (Nigerian War). It was released in 1971, but in 1974, I recorded another one, which was released under Tabansi Records.

How many albums do you have in the market?

Many musicians have wives, concubines and several children outside wedlock but you have only one wife. By the way, do you have kids from other women?

How many wives did your father have?

He married only my mother and my mother died early.

Do you have children outside wedlock?

Why should I have children outside wedlock? Like I told you earlier, long before I became popular as a musician, I had sworn to marry only one wife.

When did you get married?

I got married after the civil war; that was in 1971.How were you able to cope because at that period, you were not making enough money from music?It’s because of the love we have for each other that made it possible for my wife and I to stay together till date.

How were you able to overcome competition in the music industry?