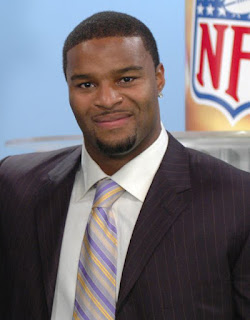 Osi Umenyiora put together a dominant career with the Giants.

In 129 games from 2003 to 2012, the defensive end amassed 75.0 sacks, good for the sixth-most in franchise history. Additionally, his 32 forced fumbles ranks No. 1 all-time among Giants legends, while his 70 tackles for loss comes in at No. 4. Umenyiora was a two-time All-Pro, two-time Pro Bowler and of course, a two-time Super Bowl Champion during his years with Big Blue. He was inducted into the Giants Ring of Honor back in 2015.

As impressive as he was on the field, Umenyiora has made a tremendous impact off the field as well. While he was born in London, Umenyiora's parents are both originally from Nigeria. He has quietly been donating resources to Nigeria for two decades now, but he recently decided he wanted to do more for his homeland.
Umenyiora's latest humanitarian effort is called The Uprise, a football program established in Nigeria by the former Giant and Ejike Ugboaja, a former Nigerian professional basketball player.

Through this program, three young men earned the opportunity to travel to the International Combine in London.

"We had some of the guys come over to the UK combine, and the people who saw them were wowed," Umenyiora said. "They were amazed by the level of size, strength and athleticism these guys have, and I was just telling them there's so many more of them there who just need that opportunity, right? And the mentality and the work ethic that they all have, it's not just, 'Oh, I need to make it the NFL.' They want to go to school, they just want a chance to do something better with their lives, and American football is pretty much a sport that gives them that opportunity."

Check out the video below to view Umenyiora's inspiring effort to help grow football in Nigeria through The Uprise.
In the latest edition of Papa's Perspective, Bob Papa and John Schmeelk look back at some of the most memorable matchups between the Giants and Bears, which can be found in the audio below.
Igbo Diaspora NFL Osi Umenyiora Sports