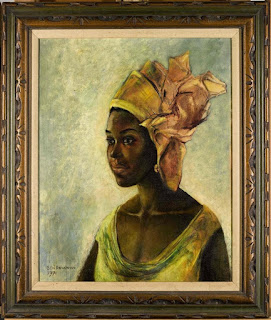 
Every art masterpiece has as allure and charm that revolves around it adding to the value and mystery of the work. When such works are showcased, a cluster of wonder is centred on who the sitter may have been, the relationship between artist and sitter, the working disposition of the artist and more. These and more have guided and led the famous works of Leonardo Da Vinci especially his most prevalent work Mona Lisa. The Mona Lisasmile is a smile that gives credence to the historic renaissance painting of Leonardo Da Vinci believed to have been painted 1503-1519 and probably was not finished due to the death ofthe creator Leonardo Da Vinci. The Mona Lisa painting has lasted a century, as well as it has lasted a lifetime.

The western world has been known to be the hallmark of art, a world exquisitely decorated with beautiful artworks of various artists and let us not exclude that these beauties are laced with what was shipped away from various African countries through the devastating history of Africa, as they add it to their endless collection of art and beautification.

In the African domain of Nigeria, Benedict Chikadibia Enwonwu was a famous Nigerian painter and sculptor, the first professor of arts in Nigeria at the University of Ife (now Obafemi Awolowo University) and fondly called the father of modern art.

His works as it is for unimaginable reasons have recently been making a comeback in the 21century after being lost for over 60 years. His famous work for details of grandeur called the “African Mona Lisa” is the picture of an Ile Ife princess Adeutu warmly called Tutu. Being of noble birth just as Mona Lisa by Da Vinci was and having her as a sitter took tedious patience of 6 months of study and persuasion by her creator Ben Enwonwu, before her family approved. The hesitation leans on the just-ended civil war (Biafra), having an Igbo and Yoruba relationship at such contentious time was like an attempt to commit suicide. The intricacies of Tutu is similar to Mona Lisa with the lost and found curse of great pieces as Tutu was found in a conventional home in London.

Tutu also branded as African Mona Lisa is an embodiment of love, hope and reconciliation at a muddled time of Nigerian history. She may not have suffered series of wars like her counterpart Mona Lisa, but she was affirmatively the beauty born out of war, a symbol that projects the rebirth of a nation. She holds a cultural significance of the Biafra war and the unity sort, in the aftermath of the war therein having an Igbo sculptor and painter work on the Yoruba princess Adetutu.

Mona Lisa definitely does not share this unification trait as Tutu, but she has conquered the hearts of powerful men like Francis 1 of France and the infamous Napoleon Bonaparte hanging on his bedroom wall for years, whilst surviving abduction, war and amputation. Tutu also made a headway for herself as she first conquered her master who could not let her go and therefore drew two more in order to hold on to the first and original which he considered a masterpiece though still missing after a robbery attack in his home.

As fate may have it the second painting emerged as earlier stated in faraway London. She was put up for sale February 28,2018, in London’s Bonhams auction house and was streamed live in Lagos, carting off with the sum of 1.2million pounds. While another of his portrait, Christine Davis recently bagging the second-highest sale of Enwonwu’s works at 1.1million pounds. Both work beating the expected estimation.

Thanks to the recent rising popularity of African contemporary arts, her worth was realized. These sales have made history to probably be the highest selling Nigerian artwork to have sold over a million in dollars and pounds.

In comparing both images of Da Vinci’s Mona Lisa and Ben Enwonwu’s Tutu, one thing is unmistakable, and that is the natural or quirky beauty of both sitters, compared to this time of 3D and HD makeup artistry. While both portraits have a perplexing demeanour, they also exhume an aura of grace with Tutu’s perfect blackness and voluptuous lips and cool look away gaze, as Ben Enwonwus’ works are known to celebrate the African melanin skin being a keen supporter of the negritude movement at the time.

Suffering attacks in 1956,Mona Lisa was therefore replaced with a bulletproof casing; it was further attacked in the years 1974 and 2009. Portraying like Enwonwu’s Tutu, not just of a woman but of history and its times of slavery and war thus revealing the disparity in times and centuries. Tutu so far unlike her western counterpart has had no harm meted out on her as she makes her grand awakening breaking barriers as with other works of Enwonwu.

A year and months after the African Mona Lisa made her debut, so did Christine with an amazing sale. It is believed there is a 50/50 chance of Tutubeing alive or dead coming from a home of over a hundred siblings and relations. She again might have been a sister of Christine in another life because the resemblance is uncanny.Like every great work of art, there is always a history of mystery and fascination befitting it which Tutu and Mona Lisa represent. Like fine wine, the older it gets the better it gets.