The Imperative Of A National Holiday For Zik 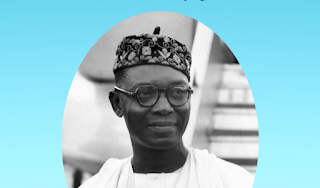 Today (November 18) is a public holiday in Anambra State in honour of Nigeria’s first President, Dr Nnamdi Azikiwe, who was born on November 16, 1904. The holiday was shifted by two days because his (post humous) birthday this year was last Saturday, a work-free day. There ought to have been a holiday throughout the country today because Zik was not just Nigeria’s finest national leader but also a pan Africanist of the finest hue.

It is a deserving honour for the pivotal leader who led the charge for Nigeria’s independence on October 1, 1960. As a result of his unparalleled efforts Dr. Nnamdi Azikiwe would in the course of time become the only black Governor-General of Nigeria, the first President and Commander-in-Chief of the Armed Forces, the only Nigerian whose name appeared in a Constitution of Nigeria, the first Senate President, among many other sterling firsts.

The great one fondly called Zik of Africa remains a binding force of togetherness in Nigeria even in death. He deserves a national holiday on his birthday, November 16, as eminently highlighted by Chief Willie Obiano, the Governor of Anambra State, by urging President Muhammadu Buhari to declare the birthday of Nigeria’s first president as a public holiday.

Governor Obiano who made the call at Alex Ekwueme Square, Awka, while marking Nigeria’s 59th Independence celebration stressed that some African nations like Ghana and Tanzania had honoured their pan-African leaders such as Kwame Nkrumah and Julius Nyerere. He described Dr. Azikiwe as the greatest Nigerian who lived in the last century and argued that with the requisite honour being given to Zik it would enable the people to have a better understanding of Africa and the black race that Azikiwe inspired.

The governor revealed that Zik inspired notable citizens and nationalists, including Chief Obafemi Awolowo and Bashorun MKO Abiola, with his intelligence, eloquence and public oratorical skills.

Leading from the front, Governor Obiano stated that Anambra State will start to observe November 16 annually as a Work-Free Day in commemoration of the birthday of Dr. Nnamdi Azikiwe. He pointed out that the day would be set aside to reflect on the contributions of Dr. Azikiwe to the growth of the country at large.

There is no gainsaying that Zik remains Nigeria’s foremost nationalist and therefore deserves a national holiday. This comes from the background of President Buhari having set the precedent of honoring the presumed winner of the June 12, 1993, presidential vote, Chief Moshood Abiola, with the renaming of the National Stadium in Abuja after him, bestowing on him the Grand Commander of the Federal Republic, Nigeria’s highest national honour given to only heads of state, and making June 12 a national holiday.

As the erudite Anambra State Commissioner for Information and Public Enlightenment, C. Don Adinuba, said, “Abiola never left anyone in doubt that he was greatly inspired by the nationalism, patriotism and sportsmanlike spirit of Nigeria’s first president, Dr Nnamdi Azikiwe, GCFR, PC. Abiola remained an avowed Zikist up to his death.”

On his part, Governor Obiano reiterated: “It has become imperative to remind President Buhari of the request I made to him on behalf of the government and people of Anambra State when he visited Onitsha to commission the newly completed Zik Mausoleum last January 24 that he declare Zik’s birthday a national holiday. Ghanaians observe the birthday of their first president, Dr Kwame Nkrumah, himself a Zik protégé. Tanzanians observe a national holiday in memory of their first president, Mwalimu Julius Nyerere, as Angolans do in memory of Dr Agustiono Neto, their first president.

“The Great Zik of Africa was not just Nigeria’s first president or the man who led Nigeria to independence in 1960. He was Nigeria’s first indigenous Governor General and the first Senate President. He was the first Nigerian to build a bank, thus inspiring his colleagues as regional premiers in the 1950s to establish their own banks. He was also the first Nigerian to set up a university, and consequently challenged his peers to follow in his footsteps. A Nigerian nationalist of incomparable status and a man of letters through and through, the Great Zik of Africa had established as early as the 1950s newspapers in Ibadan, Zaria, Kano, Onitsha, Port Harcourt and, of course, Lagos to fight for Nigeria’s liberation from oppressive colonial rule.

“Zik inspired a generation of Africans, including the late President Nkrumah of Ghana, Chief Obafemi Awolowo and Dr Nwafor Orizu, who became Nigeria’s second Senate President. It has, therefore, become a national scandal that a national holiday has yet to be declared in honour of this great African son. The people and government of Anambra State once again call upon President Buhari to end this national blight by declaring November 16 of every year a national holiday in commemoration of Dr Azikiwe’s birthday.”

A quintessential Renaissance man, Zik was a politician, poet, author, orator, sportsman, visionary, nationalist, but above all else, a remarkable human being.

Zik lived and died as the acclaimed Father of Modern Nigeria. Zik was the complete Nigerian. Born in the Hausa-Fulani North of Eastern Igbo parentage, Zik spent his most productive years in the Yoruba West. He spoke Hausa, Yoruba and Igbo fluently, as well as other Nigerian languages. He was a welcome presence everywhere n the country.

Zik who wore the traditional title of Owelle of Onitsha with uncommon aplomb was the lionized author of books such as Renascent Africa, Liberia in World Politics, My Odyssey etc.

A national holiday for the leader who made Nigeria’s independence possible is very imperative. The Nnamdi Azikiwe national holiday, or Zik’s Day, is an idea whose time has come in celebration of the father of modern Nigeria. It is incumbent on President Buhari to make it happen.