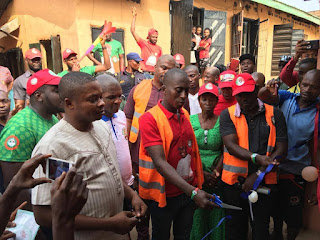 Ndi-Igbo Germany (N.I.G.), the apex body of all Igbo unions in Germany has placed a ban on the conferment of traditional Igbo titles on its members of the group in Germany.

This is contained in a statement jointly signed by Engr. Oge Ozofor and Mazi Tony Dominic, the coordinator and the general secretary of the group respectively.

The statement which described the practice as an aberration reads: “As custodians of our culture in foreign land, N.I.G from inception has strived to maintain the purity and the essence of our culture. To this end, we have successfully banned all forms of falsification, commercialization or impersonation of Igbo traditional titles of Ozo, Nze, Eze, Onowu or such similar titles here in Germany.

“The conferment of such titles is the prerogative of specific Igbo communities/kingdoms in Igbo land. Such conferment is a celebration and recognition of consistent contributions of positive influence and development made to the specific community or the larger society by the recipient. Chieftaincy or title taking is a personal issue which is based and hinged on particular autonomous communities who could, after the title-taking, address the recipient as Chief, Eze, Ogbuefi, etc of that community.

“In clear text, we want to bring to the notice of the public, all the embassies of the Federal Republic of Nigeria, the state governments of all the South-East states, their Ministries of Culture and Chieftaincy Affairs, their State Council of Chiefs and Traditional Rulers that any person, persons parading himself/herself as Ozo, Nze, Ogbuefi, Onowu (XY name) OF GERMANY or such similar tittles are nothing but imposters and impersonators and should be treated as such.

“Ndi-Igbo Germany (N.I.G.) the only authentic apex body of all Igbo unions in Germany does not confer and does not recognize such traditional titles. They are non-existent in Germany.

“Ndi-Igbo Germany is calling on all Ndi-Igbo, both home and abroad to join hands with us and halt this cultural aberration which erodes, cheapens and bastardizes our value system of hard work, honesty, benefits and reward system. We call on all Igbo diaspora groups in the world to join us and take similar stand.’